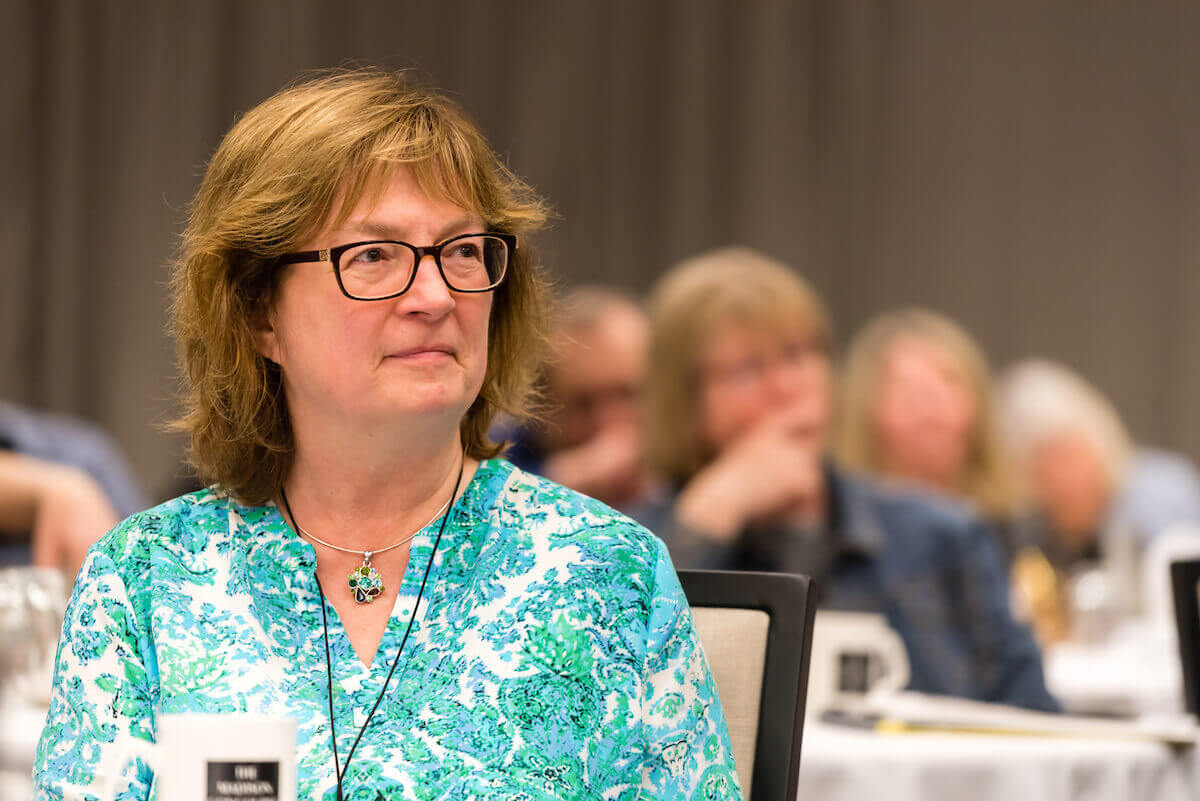 Christine DeSmet, a faculty associate in Continuing Studies and founder of the well-respected Writers’ Institute, has been named the recipient of the UW-Madison Robert and Carroll Heideman Award for Excellence in Public Service and Outreach for 2014.

DeSmet was recognized for her many years of dedicated instruction and support of writers in Wisconsin, the U.S. and other countries. She created Writers’ Institute, an award-winning and nationally recognized conference now in its 25th year and is a founder and director of the summer Write-by-the-Lake Writer’s Workshop & Retreat. This program, in its 16th year, draws participants from across the country and offers credit through the UW-Madison Department of English.

Having touched the work of thousands of adult students in Wisconsin and beyond, DeSmet says her students have published books and optioned scripts, or enjoyed successes in national contests.

She is a graduate of UW-Madison’s School of Journalism holding both a bachelor’s and master’s degree.

Christine agreed to share some background and highlights of her career:

What was your inspiration for writing?

My inspiration was my high school teachers who were entertained by my writing and entertained in a good way. I remember reading aloud a funny piece about our school librarian and everybody loving it. What a feeling that is for a kid when somebody “in the know” values what she writes. That stuck with me forever and is part of my teaching philosophy.

What was your favorite book as a teen or child?

I read all the classic stuff. I read Tarzan adventures, Huck Finn, Little Women, and Alfred Hitchcock magazine mysteries all in the same week. I was eclectic. Then came books like the entire Lord of the Rings trilogy in fifth or sixth grade, and Civil War books galore. I devoured the newspaper the moment it came to the mailbox on our farm. My Dad and I had friendly tug-of-wars over who got what newspaper section first on Sunday mornings.

Did you have a family member/teacher who encouraged/inspired you?

I’m both a screenwriter and novel author and teacher of both. My screenwriting inspiration came from the adult students and instructor, Larry Edgerton, in a 1980s UW-Extension scriptwriting class. I was writing a feature article about the class and got sucked in!

About that same time I was inspired by Marshall J. Cook, Continuing Studies emeritus professor, who pretty much said, “Go for it” every time I talked about a novel project. I was a college student doing publicity for Marshall’s programs when I began writing both novels and screenplays. It should be noted that because of Marshall’s encouragement I wrote my very first novel manuscript and it went on to win a national award from Romance Writers of America.

What keeps you going as a writer now?

My adult students! They are so filled with excitement at discovering the magic of words and how to create a career from mere words. Pure joy erupts in our classrooms and online exchanges. Writers are magicians. There’s truly magic in the process of creativity and putting words together in various combinations that move readers emotionally and intellectually. It’s an endless puzzle that intrigues me.

Who are your favorite authors?

My students when they publish.

How do you describe your teaching style?

It’s a coaching style. I’m pretty well known for being practical and helping adults save time, heartache, and money. I find the very best advice and bring that to my students. I cut to the chase on difficult questions. As a mentor, I also try to stick with writing students all the way through the process which includes several revisions, getting an agent or marketing on their own, then revising again for the agent until an editor pays attention or the writer self-publishes. That process can take a year or two or three and I’m there for them through that entire time. Helping them realize their dream is really important for me.

What’s your favorite topic to teach?

Probably story structure because it’s the backbone of any novel or screenplay or story.

I’ve seen many, many successes over the years with the writers who have come through my Continuing Studies classes or have used our Critique Services. We post many of these success stories on the writing page of the Continuing Studies web site.

Teri Woods, here in Madison, is somebody who was on last year’s success panel at Writers’ Institute. Teri attended Write-by-the-Lake Writer’s Workshop & Retreat a few years ago. She was starting her first suspense novel and needed somebody to nudge her to fix a few things. I nudged; she revised. From there she met with an agent at our conference, then self-published to build her audience for a suspense book. Next the agent got her a three-book deal with a New York publisher. Helping to launch her career, and witnessing Teri’s graciousness all along the way, is the best reward I could ever receive. When her suspense book is finally published—now for the second time—I’ll have tears in my eyes. And I’ll be first in line to buy her book.

DeSmet developed the Wisconsin Screenwriters Forum (WSF) from a local group of adult writing students in the 1980s to an association for scriptwriting professionals who reside in many states and in Hollywood. She served as WSF president for 10 years. DeSmet also created UW-Madison conferences to help found and develop the Wisconsin Chapter of Romance Writers of America; RWA is the largest writers’ organization in the world.

She is a professional scriptwriter and author of novels and short stories. Her credits include winning Slamdance Film Festival in Park City, Utah, and optioning that screenplay to New Line Cinema. Her novels include a bestselling mystery series set in Door County, published by Penguin Random House, New York.

Join us in congratulating Christine on her award and her many successes!