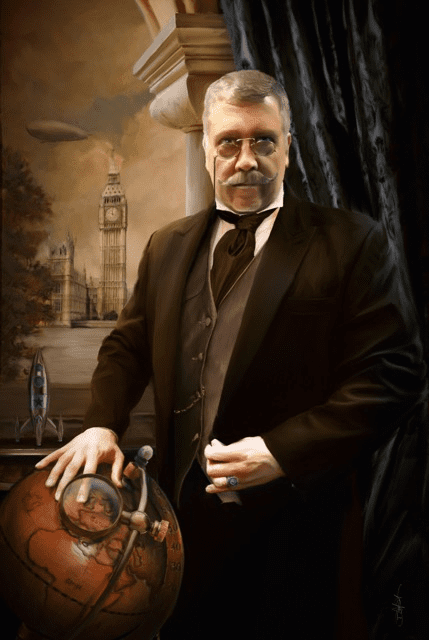 Eric Larson teaches digital art and design at the Madison Media Institute, but his alter ego, Lord Hastings Robert Bobbins III, engages in more thrilling pursuits.
Lord Bobbins is a hero of the steampunk community, whose denizens immerse themselves in an elaborate reimagining of the Victorian era. He presides over Madison, Wisconsin’s annual TeslaCon, a preeminent steampunk convention. TeslaCon creatively combines the retro and the futuristic, encouraging attendees to dress up, play-act, and bring a fantasy to life. The 2010 convention transformed a hotel into the inside of a zeppelin, while the 2012 event promised a “Trip to the Moon,” complete with aliens and an evil villain.

The theme of this year’s TeslaCon is “The Wild Wild West.” While Eric Larson plans the November event, Lord Bobbins himself will make an appearance at the UW-Madison Writers’ Institute on March 27-29. He’ll speak on “Steampunk as a Literary Vehicle” (March 28, 1:45 p.m.), exploring creative ways to reimagine the past. He’ll also take part in the “Evening Discussions with Writers” (March 27, 7 p.m.), where he’ll preach the virtues of leaving your comfort zone to find inspiration.
Larson will stay in character during his appearances, at least part of the time. He describes his Lord Bobbins persona as “the prime minister of England circa 1885.”
“He is loosely based on several characters in film: the befuddled grandfather from “Chitty Chitty Bang Bang” and Peter Ustinov. He is also influenced by Terry Thomas, the British comedy actor. At times he has the seriousness of Winston Churchill, though it still usually ends up being somewhat comedic.”

Now in its 26th year, the Writers’ Institute helps writers in all genres take their careers to the next level. It offers practical advice for improving and selling manuscripts, as well as a unique opportunity to make pitches to literary agents and publishers. The conference takes place at the Madison Concourse Hotel, featuring lectures, workshops, book signings, practice pitch sessions, and networking events.
Like writers, steampunk creators play around with genres, including science fiction, horror, and westerns. They also create characters, adopting personas like Lord Hastings Robert Bobbins III. At the Writers’ Institute, Larson will discuss how authors can fit their characters into a world that is not quite normal.
“Hopefully I can open some doors and give the writers a perspective of what to think about when crafting their own worlds,” he says.
For more information about the 2015 Writers’ Institute, contact Laurie Scheer, 608-265-3972.