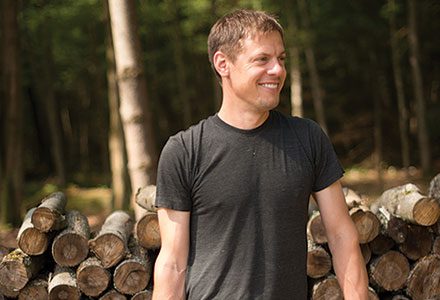 Attention, wilderness lovers: Steven Rinella is coming to Madison to discuss his unique experience as an American hunter.
The celebrated writer and TV host will give a free talk at the Wisconsin Institutes for Discovery’s Hector DeLuca Forum, 330 N. Orchard St., on Tuesday, April 14, at 5:30 p.m. He’ll explore his lifelong relationship with nature through the lens of several hunts, beginning when he was an aspiring mountain man at age 10.

Rinella writes on outdoors topics for the New Yorker, the New York Times, and Field and Stream, and he’s published “The Scavenger’s Guide to Haute Cuisine” and “American Buffalo: In Search of a Lost Icon,” among other books. He has also established his hunter’s cred as host of the TV series “MeatEater” on the Sportsman Channel, as well as the popular “MeatEater” podcast.
His talk, titled “Meat Eater: Adventures from the Life of an American Hunter,” is associated with a Massive Open Online Course (MOOC) called “The Land Ethic Reclaimed: Perceptive Hunting, Aldo Leopold, and Conservation,” which was offered by UW-Madison from January 26–Feb 22. The MOOC examines the connection between hunting and conservation, as well as the legacy of the pioneering Wisconsin conservationist Aldo Leopold.

The future of conservation

“The Land Ethic Reclaimed” is part of a new round< of MOOCs from UW-Madison, focusing on themes and events relevant to Wisconsin. Next up is “Shakespeare in Community,” beginning April 26.
“In our Land Ethic MOOC, we heard from people all across the state and around the world, reflecting on how they feel about the land, about hunting, and about the future of conservation. I am really looking forward to continuing that conversation with Steve,” says Paul Robbins, director of the Nelson Institute for Environmental Studies, who will introduce Rinella on April 14.
Rinella currently lives in the Pacific Northwest but is a Midwesterner by birth.
“I have several good friends in Wisconsin, and I enjoy hunting there a great deal,” he says. “I’ve always been impressed with the pride that Wisconsinites show toward their landscape.”
Rinella's talk will be filmed by the Sportsman Channel. Afterwards he'll sell and autograph books from 6:30-7 p.m. Registration for the event is encouraged but not required.