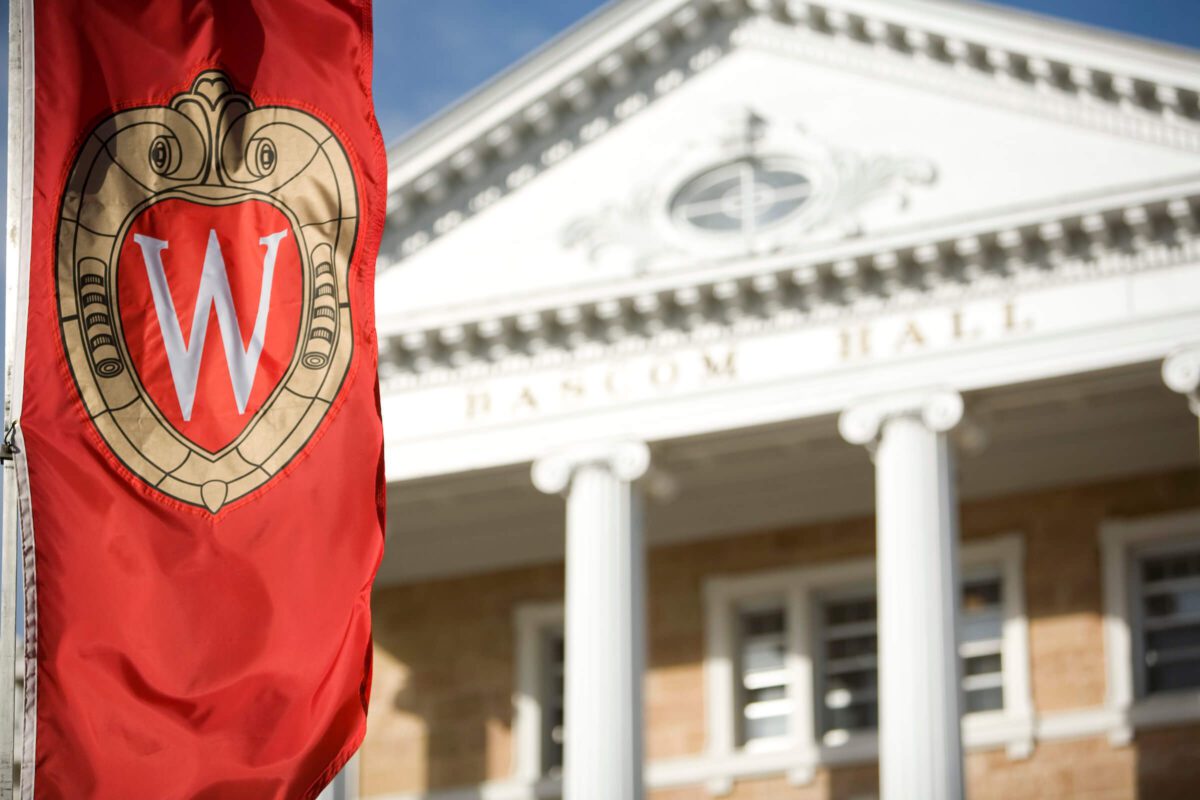 When her dad was 67, he went back to Madison College for a technical program. At the same time, Allen, 45, headed back to the University of Wisconsin–Madison—25 years after she first attended—to get her bachelor’s degree in Community and Nonprofit Leadership.

“That intellectual bend is in our family,” Allen says. “We like to be educated, and we like to learn.”

Rick Kempf also committed to learning later in life. After leaving UW–Madison 30 credits short of his degree, Kempf went on to a career in sales as a cheesemonger. He returned seven years later and will soon earn his bachelor’s in Community and Environmental Sociology.

“Coming back to school, I was looking for more,” Kempf says. “I wanted to do something meaningful and make an impact in the world.”

Both Kempf and Allen persisted through challenges and now plan on careers in community service. For their exemplary efforts, they will receive an Outstanding Undergraduate Returning Adult Student Award. Students are usually recognized at a spring ceremony, but due to the COVID-19 pandemic, the ceremony is postponed until fall 2020.

Struggling with bipolar disorder, prone to depression and with a family history of addiction, Allen spent years self-medicating with alcohol. She attempted suicide twice. About 10 years ago, Allen decided that wasn’t the life she wanted. She went on prescription medication, reconnected with a faith community and engaged in recovery.

Today, she’s the women’s director at Serenity Home Sober Living in Madison. She’s been a residential manager at this nonprofit for six years.

“Time went on, and I realized that I had a special skill set,” Allen says. “I have a lot of tolerance for people going through the changes and challenges of recovery. I found that I was really good at something, and people I worked with encouraged me to go back to school.”

Allen says her parents and sister were driving forces in helping her turn her life around, as were friends and colleagues at recovery communities and her church family.

Kempf lacked support his first time around as a UW–Madison student, and he lacked the skillset necessary for a positive academic experience.

“Going to school is kind of like running a business. You don’t have a boss or a schedule and you have to make that all up for yourself. I wasn’t expecting that,” he says. “I went to college and it was just me. My parents didn’t follow-up and ask about grades, and I just didn’t know there were ways to get help.”

Also struggling with depression and having attempted suicide in his 20s, Kempf battled with a core belief that was holding him back: He was not good enough. He realized he held this limiting belief after attending a seminar with the Wright Foundation for the Realization of Human Potential, which sparked his desire to return to school and continue learning.

Kempf’s work with the Wright Foundation led him to explore reasons for his lack of confidence, including a difficult childhood. His dad’s family included three generations of refugees, and “their psyche was survival.” As he started to heal from past wounds, he built meaningful relationships with friends, coworkers and even his family.

“I began to build a support network that I needed to succeed in school,” he adds.

Challenges and rewards of going back to school

Balancing life and school proved difficult. Kempf struggled with assignments and realized that going back part-time was his best bet.

“My first year back I performed roughly on par to how I did when I was in school before,” Kempf says. “But now in my third year back to school, I achieved a 4.0. I’m proud of my progress.”

He found time for a campus job with the Adventure Learning Program where he worked with youth in experiential education programs on challenge courses (and even got to send Bucky Badger down a zipline). Along with teaching him about inclusive engagement, this work opened a door for him with the Leadership Certificate Program as a student advisor. He’s thrived in both roles.

Larry Jolón nominated Kempf for the adult student award and adds: “He has flourished in the past three years and has been a part of streamlining our Leadership Certificate Program, leveling up his professional skills and providing quality advising for students. In less than two years, he has advised over 270 students in developing their leadership ability.”

Allen has also thrived as she continued to face challenges when she went back to school, especially when her parents got sick. She took time off to care for them. Within a year and 10 days, she lost them both to cancer. Then, COVID-19 hit.

“But I’m blessed to have a great community who supports me. I was able to take time off from school and work and be there for my parents,” she says.

Allen says being the oldest student in the room in her UW–Madison classes was a bit daunting, but nothing that she couldn’t face with her signature determination.

“Being in class with younger students took some getting used to, but professors were very supportive,” she says. “I was always just open and honest and proud to be there. I told students, ‘Hey, I may be your parents age, but I just took a little detour getting here.’”

Emily Keepman, who nominated Allen for the award, adds: “Because of her previous work and life experiences, she is a wonderful addition to the classroom by offering additional perspective to class discussions and projects. It’s a real benefit to her more traditional classmates.”

Kempf will graduate in May. Allen plans to graduate by the end of 2020. Both are eager to serve a broader purpose with their new degrees.

Kempf is working on earning his own leadership certificate. This summer, he was hired as an adventure instructor with Madison School and Community Recreation, an opportunity he created for himself. But due to the pandemic, that’s on hold.

He’s pursuing a career in school districts, higher education or even the business world where he wants to continue working in leadership development.

“I came in with a growth mindset,” he says. “In many ways I behave differently as I’ve grown. I can show up now in a way that people are more receptive, and I can see what things I have to offer that are of value to a community.”

With a service-oriented mindset, Kempf co-organized and hosted a retreat called WisconSing for people to join together in song and build community. Seventy people gathered at the inaugural event last April, and he plans to continue this uplifting tradition as the pandemic passes, incorporating the group as a nonprofit.

Allen’s greatest hope is to continue her efforts for a nonprofit organization after graduation, working with marginalized communities.

“Here in Madison, I really want to affect an at-risk population, people who are struggling with mental illness and unstable housing,” she says. “But I’ll always be working in the recovery world. We have so many women who consider our community home. I’m proud of that.”

Her goal in getting a degree is to make a difference.

“My desire is simply to make the world I live in, and pass through, better,” she says. “Every day I let the residents in my community know that someone cares about them. Once I obtain my degree, I would like to work more closely with mental wellness.”

These two outstanding adult students have advice for others looking to take the leap and go back to school: Find a support network, ask for help and just have confidence you are capable of great things.

“The past three years have been some of the richest years of my life. Academically, I have had a complete transformation,” Kempf says. “Professionally, I took the biggest risk of my life leaving a successful career in sales to come back to school. And in that time, I have been involved in things I did not even dream of before.”

Allen adds, “I want people to know that the possibilities are endless. Just because you’re a little bit older doesn’t mean you can’t be what you want to be. Just trust that you can do it, because you really can.”