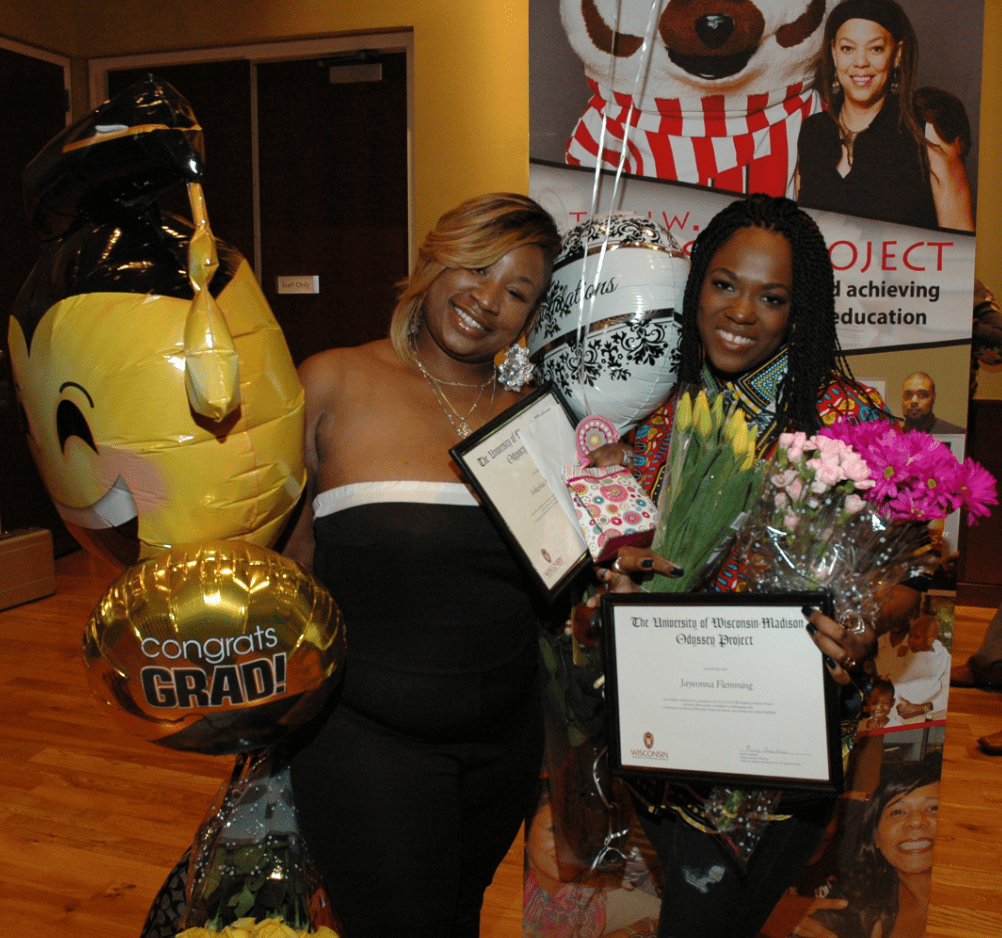 The Odyssey Project is the University of Wisconsin-Madison’s college humanities class for adults with serious challenges. They receive free tuition, textbooks, childcare, and a weekly dinner, along with earning six credits in English. Lest you doubt the significance of their achievement, director Emily Auerbach began last Wednesday’s ceremony with a catalog of obstacles facing the class of 2016: “accidents, diseases, breakdowns, breakups, pregnancies, hospitalizations, layoffs, homelessness, emergency surgeries, incarceration, crises, and deaths of loved ones.”

Auerbach referenced the title of a Langston Hughes poem—“Still Here”—as a tribute to the students’ resiliency. And as each one

came to the podium to read autobiographical writings from class, you could only marvel at their eloquence in the face of adversity.

‘It’s only the beginning for me’

Auerbach and her fellow instructors expose the Odyssey students to William Shakespeare, Emily Dickinson, Martin Luther King, and other canonical writers, and their work has clearly made an impression. Jayvonna Flemming compared her Odyssey experience to jumping on a trampoline, imagining herself with “arms held high while I’m reaching for the stars.” Shaimaa Ahmed used another artful metaphor to describe her role in her family, which traveled a difficult path from Iraq to Madison:

I am a tent that holds her kids.

I protect them from cold,

Protect them from the risks of life.

I travel to wherever they take me.

Snow starts to fall, and my socks get wet.

My pants rustle in the wind.

I stumble to an abandoned factory.

Some students read in both English and their native language, from Spanish to Arabic to Hmong. Some performed with stunning dramatic force, while others bravely carried on through tears. Some acknowledged their mistakes, some worked through their anger, and some claimed victory after a life of struggle.

‘Each one of you is a masterpiece’

Jeffrey S. Russell, the dean of UW-Madison Continuing Studies and vice provost for Lifelong Learning, spoke for many in the audience by expressing awe at the Odyssey class of 2016.

Russell promised that UW-Madison would support the graduates as they continue their education. Over the Odyssey Project’s 13-year history, many alumni have gone on to earn degrees and find jobs they never would have dreamed possible. Auerbach thanked the volunteers and donors who’ve helped make these dreams come true, including the Madison Public Library and the Evjue and

Brittingham Foundations. Anyone wishing to contribute to the program can learn more here. Photographs of Odyssey’s 300-plus alumni filled Varsity Hall, and many alums showed up to celebrate the current class.

One of them, Anthony Ward, is now a teacher in Odyssey Junior, a related UW program for the children and grandchildren of Odyssey students. Surrounded by adults and kids from the extended Odyssey family, Ward led the crowd in a call-and-response rap that nailed the evening’s spirit: “I know that up is the only way to go!”.