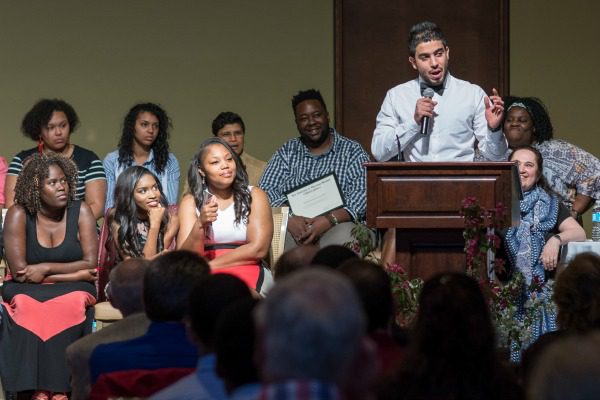 On May 3, Union South’s Varsity Hall was packed with both people and spirits. The people had come to celebrate the Odyssey Project’s Class of 2016-17: 30 adult students who’ve earned credits in English from the University of Wisconsin-Madison.

The spirits hovering over the affair included Plato, Abraham Lincoln, Helen Keller, Emily Dickinson, and others name-checked on the podium. These are some of the political and literary figures who inspired the Odyssey students during the two-semester humanities class. Their influence was evident in the students’ moving speeches, which included poetry in several languages and declarations of self-reliance worthy of Ralph Waldo Emerson.

Self-reliance is what helped these students continue their education in spite of extreme challenges. Now in its 14th year, the Odyssey Project is a free weekly class for low-income adults seeking a head start on a college degree. Graduates of the program, whose pictures lined Varsity Hall and who filled many of the seats, have gone on to do great things and give others a leg up.

In her introductory remarks, Odyssey director Emily Auerbach listed some of the obstacles students faced this year, including hospitalization, homelessness, and deportation scares. Auerbach elicited the biggest cheer of the night when she announced that Ahmad Nahas, an Odyssey student from Syria, had been granted political asylum in the U.S.

The most powerful weapon

As students took the podium one by one, they spoke of drawing strength from the authors they studied, as well as from Odyssey staff and each other.

Ngina Ali quoted Nelson Mandela: “Education is the most powerful weapon you can use to change the world.” Belem Calixto Martinez acknowledged her mother and father, who proved that “with hard work everything is possible.”

Many students gave Odyssey credit for a transformational experience.

“The readings have connected me to things that happened so many years ago but are still valid today,” said Victoria Patterson. “You all have taught me that writing can bring out emotions we didn’t even know were attached. I feel like I’ve grown so much from the first night, when I was shy and didn’t speak.”

José Mendoza expressed his gratitude in verse, employing a powerful metaphor of a caged bird escaping:

My life has changed

My wings are strong

I am not afraid

Now I can fly

The students were passionate about thanking those who inspired them, but by completing the Odyssey course, they’re the ones serving as an inspiration to others. UW-Madison Chancellor Rebecca Blank said as much in her keynote speech.

“You have inspired your children and grandchildren, friends, neighbors—people you might not even know,” she said.

Those weren’t just empty words. After the ceremony, several audience members picked up applications for the 2017-18 Odyssey class.

To donate to the Odyssey Project, see here. For more information about the program, see here or contact Emily Auerbach, 608-262-3733, emily.auerbach@wisc.edu.