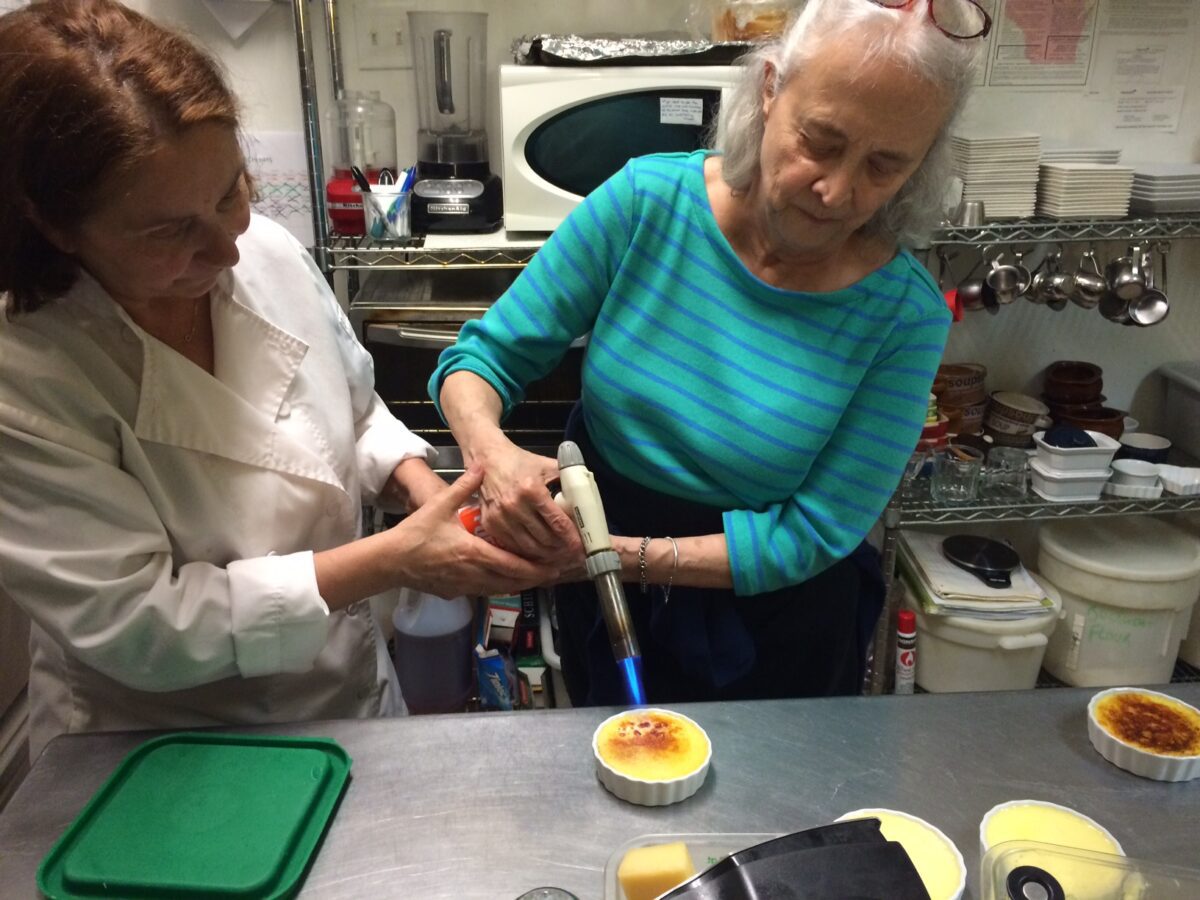 Is it easier to learn French while eating crème brûlée or salade niçoise?

Prof. Sage Goellner thinks so, and that’s why she combines language instruction and food in her French courses for the University of Wisconsin-Madison’s Division of Continuing Studies. Goellner can even cite a French expression to prove her point: “Ventre affamé n’a point d’oreilles.” It translates as “an empty belly hears nobody.”

“It’s hard to concentrate when you’re hungry,” she explains. “When our bodies are ready to learn, so are our minds.”

Students’ minds were definitely ready to learn in the recent Continuing Studies courses Faisons la Cuisine and Saturday Intensive, both held in Madison restaurants and both conducted entirely in French.

“French culture’s love of good food is palpable in the language,” Goellner says, “so it makes sense to combine learning French with food.”

Faison la Cuisine (or “Let’s Cook”) set up shop in Chez Nanou, teaching students what it’s like to make traditional country-style dishes in a Paris kitchen. With the help of restaurant owner Anne-Marie Rieunier, they prepared a full meal while learning the relevant French terms. Afterwards, the students and their guests sat down to dinner—in essence, consuming their coursework.

“Faisons la Cuisine participants included foodies, retirees, and past and future travelers to France,” Goellner says. “Students practiced authentic French recipes that they can cook at home for family and friends. They also increased their culinary vocabulary, their recipe repertoire, and their confidence about making other French meals and conversing in French.”

Barbara Landay came to Madison all the way from Germantown, Wis., to take Faisons la Cuisine. She studied French in high school about 40 years ago and had reason to brush up: she and her husband have planned a trip to France.

“I learned how to make several classic French countryside dishes, but I also communicated in French almost exclusively for three hours!” Landay says. “I was able to follow nearly all of the conversation and to share my thoughts on a range of subjects, including cooking instructions and travel. I feel more confident about my ability to communicate on our upcoming trip.”

“The class was a diverse mix of ages and experience with French and French cooking, but we were able to talk about the ingredients, the how-to of preparing the dishes, and our French language backgrounds. By the time we were sharing the leisurely meal, we had moved on to discussing the state of foreign language education in both the U.S. and France, interesting places to visit in France, and French dishes we had tried. Plus, we talked about how much we liked the food!”

In the Saturday intensive course this spring, instructors Goellner and Sandrine Pell helped students improve their French at the University Club.

“The course attracted people looking to get back into their French studies to prepare for travel or just to enjoy the community,” Goellner says. “Participants gained confidence in their ability to navigate a French menu, order food and drink in a restaurant, and ask for the bill.”

As the course title promised, the Saturday intensive was intense—five hours of speaking French each Saturday for three weeks—but the setting made for a congenial experience. Each session included breakfast and lunch, with such delicacies as beef bordelaise and chocolate-covered strawberries.

“Those things make all the verb conjugations a lot easier to stomach,” Goellner notes.

Goellner says that, on average, the French spend more than two hours a day eating and drinking, about twice as long as Americans.

“The French are very proud, and rightly so, of their culinary traditions. It can be rustic or elegant, but French food is known for its simplicity and reliance on fresh and local ingredients. The French spend time making and sharing good meals; it’s a cornerstone of their culture.”

This fall, the Division of Continuing Studies offers more courses that combine French studies and cuisine: Fridays in French: Introduction to French Poetry and French 2 and 3. For more information, contact Sage Goellner, sgoellner@dcs.wisc.edu, 608-262-4873.