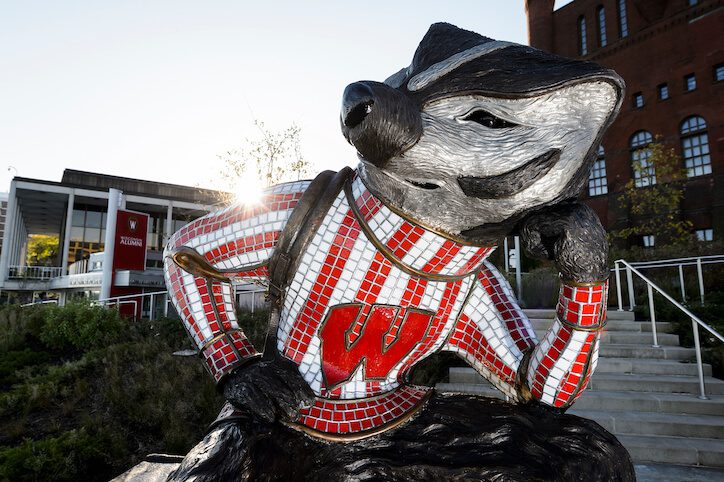 Jason Glomp never expected that working for a taxi cooperative would drive him toward a career in politics, but his 20 years in the transportation industry did just that. As president and business manager of the worker-owned taxi cooperative, he discovered his passion for grassroots organizing and defending workers’ rights.

Politics weren’t always his passion. He studied film at UW–Milwaukee until a tragic spill in January 2000 left him with two broken bones in his leg and a need to take a hiatus. He knew he wanted to return to school. But it wasn’t until the summer of 2018, when he heard Autumn Sanchez talking about the Badger Ready program on Wisconsin Public Radio, that he knew he was ready.

“I told a few of my friends that I was thinking about applying and they all but held me down and made me apply,” he says.

The University of Wisconsin–Madison Badger Ready program works with adults who may not qualify for transfer admission due to previous academic history. Glomp is the second Badger Ready student to earn an undergraduate degree.

Glomp graduated May 8 with a degree in political science and a certificate in public policy. He accepted a position as a legislative aide to Wisconsin State Rep. Samba Baldeh after completing an internship with his office this past semester. Tired of the political polarization and a representative system that he believes isn’t working, Glomp wants to help fix it rather than turn his back on it.

Thanks to the persistence of his friends and his own determination, Glomp can add both working in the Wisconsin State Capitol and becoming one of the first graduates of the Adult Career and Special Student Services Badger Ready program to his long list of accomplishments.

The program is designed for adult students like Glomp who are interested in returning to college to finish their undergraduate degree. Badger Ready staff work with those who may not qualify for transfer admission, helping them to overcome any challenges that come their way.

The program is for both adults 25+ and veterans of any age who have completed at least 24 credits from an accredited university and have experienced at least a two-year break from their education. After students successfully complete the program, they can be admitted to UW–Madison as transfer students.

“I really can’t ever say enough about the program, it is amazing,” Glomp says. “As a returning adult student who hadn’t been in an academic program in nearly two decades, I had a lot of questions about myself, my abilities and whether I would be capable of doing the work.”

During his monthly meetings with his academic advisor, he quickly realized his fears were only in his head.

He adds, “I remember that the night of the orientation, one of the advisors explained that returning adult students tend to perform better than their traditional counterparts because they bring years of life experience to the table. That proved to be true.”

Looking back on the day he heard Autumn Sanchez speaking on WPR back in 2018, Glomp’s journey has come full circle. He’s now the one leaving an impression on her. Sanchez has enjoyed watching his journey from the very beginning.

“As soon as Jason joined Badger Ready, he was all in,” she recalls.“We talked often about his goals, commitments, challenges and mindset. It’s thrilling to see him accomplish what he set out to do!”

‘Got it done with flying colors’

During his time with the taxi cooperative, one of his proudest moments was cofounding Cab Drivers for Madison Safety, an organization that empowers workers to advocate government on their own behalf.

When looking back at his time at UW–Madison, what makes him most proud?

“I didn’t just finish my degree program, I got it done with flying colors. Multiple semesters on the dean’s list, and I will finish with a GPA over 3.8,” he says. “And, I got it done in only four full semesters [after 12 credits from Badger Ready].”

Looking forward, Glomp is planning to use his new degree to address issues of inequality and to advocate on behalf of worker cooperatives, labor unions and nonprofits.

“I see my future career path as one where I can use my voice to help people and organizations that are overlooked and bullied by the political and corporate classes,” he says.