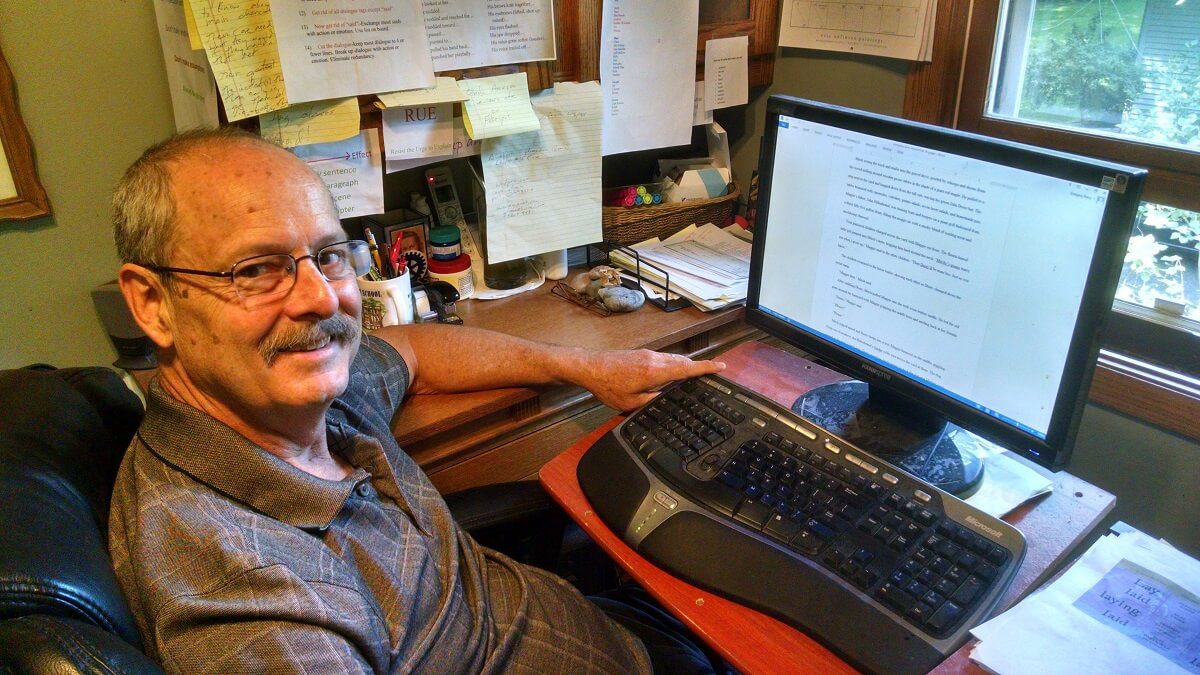 Greg Renz embraced the drama of firefighting during his 28-year career with the Milwaukee Fire Department. When he retired as a fire captain 10 years ago, he decided to build a writing career from his memories of daring rescues and his enduring love of storytelling.

“Storytelling is ingrained in the culture of firefighting,” Renz says. “We spend a good deal of our downtime entertaining one another with war stories, stories of personal challenges, and stories of humorous events.”

Though Renz had plenty of experience telling stories in the firehouse, he struggled in his early fiction-writing efforts. But with hard work and assistance from several Continuing Studies writing programs, his prose started turning heads.

Renz began his journey with online courses such as How to Write Compelling Fiction and Take Your Characters to Dinner, then began developing his first novel, Beneath the Flames, in Write Your Novel Fast and Sure. He has also attended Writers’ Institute, Continuing Studies’ annual conference for aspiring and accomplished authors, as well as the Write-by-the-Lake and Weekend with Your Novel retreats.

“With the help of these programs and teachers like Christine DeSmet, I improved, and I eventually received first place in both the fiction and nonfiction categories of the writing contest at Writers’ Institute,” he explains.

Then, in 2018, Renz sold Beneath the Flames to HenschelHAUS Publishing. Continuing Studies’ Pathway to Publication mentoring program propelled him to this milestone. Offered through Writers’ Institute, this program provides each participant with a coach who reads portions of manuscripts, assists with trouble spots, and delivers pep talks at just the right moments.

The transition from storytelling enthusiast to professional author didn’t happen overnight for Renz. The first step involved identifying strengths to build upon. He quickly realized that two things could take him far: a powerful story and a hearty supply of resilience.

“More than once I was asked to share a miraculous story about rescuing two little boys,” he recalls. “When I saw how this story affected people emotionally, I thought that maybe I could craft a compelling novel if I could learn how to put my experiences on the page.”

Renz soon found the seed of a novel in his memories of two young girls who lived near an inner-city firehouse he was stationed at for several years. He often thought about the poverty and violence they faced, and how much this experience differed from his own childhood.

“Those girls have stayed in my thoughts over the years, demanding that I tell their story. They are two of the main characters in Beneath the Flames, and I hope to do them justice,” he says.

Renz’s desire to honor these children has helped him weather the rejection involved in pitching manuscripts to literary agents. His online writing classes also encouraged him to stay motivated during trying times. Plus, they showed him just how much he had to learn.

Armed with humility and support, he soon found his sweet spot in the writing world.

“The first rejections from agents I queried were the most difficult to deal with, as these were agencies I thought would be a great fit for my story,” Renz remembers. “The challenge was to overcome the doubt about my writing ability while coping with all of these rejections.”

Encouragement from his instructors–especially novelist and screenwriter Christine DeSmet–helped him keep going.

“My instructors got me to keep writing while pushing me out of my comfort zone. The validation I received from the Writers’ Institute awards and Christine DeSmet’s belief in me and my novel were also critical for keeping the faith,” he explains.

Writers’ Institute further buoyed Renz by showing him that he was not alone in his struggles.

“A valuable insight I gained there is that all writers, no matter what level they are at, struggle with the same doubts,” he says. “The best writers never think their work is good enough.”

Even when talented writers feel insecure about their work, they stay focused on improving their craft. Renz maintained this focus while querying numerous agents and completing revision after revision of Beneath the Flames.

“Every Writers’ Institute, I add to my writing toolbox,” he explains. “The workshops always give me new things to think about and work on. For example, a workshop on editing and polishing prose was really helpful in eliminating extraneous words and redundancies.”

Plus, the community of writers Renz met at the conference and retreats has restored his inspiration time and time again.

“Networking and making new friends at these events is such an important part of the experience for me. Everyone gets me. It’s like going home,” he says.

Blazing a trail to success

Renz also learned that agent pitches often need just as much work as the manuscript itself. He enrolled in Pathway to Publication intending to focus on the marketing of Beneath the Flames while writing a second novel. DeSmet, his coach, suggested a different approach.

“She suggested we look at my query and synopsis of Beneath the Flames before getting to work on the next novel,” he recalls. “When she saw that my manuscript was 112,000 words, she informed me that I was toast with a word count that large. No agent would look at a debut manuscript of more than 100,000 words.”

Though Renz had already cut 65,000 words from the novel, he gritted his teeth and removed another 12,000.

“It was excruciating, but I realized it was essential if Beneath the Flames was to go to print,” he says. “Without Christine’s guidance, I’d still be querying agents and stacking up rejections. And without everything I learned from the classes and conferences, my story never would have come to life.”

For more information about Continuing Studies writing programs, visit the writing page, the Pathway to Publication page, and the websites for Writers’ Institute, Weekend with Your Novel, and the Write-by-the-Lake retreat. The next Writers’ Institute takes place April 4-7.