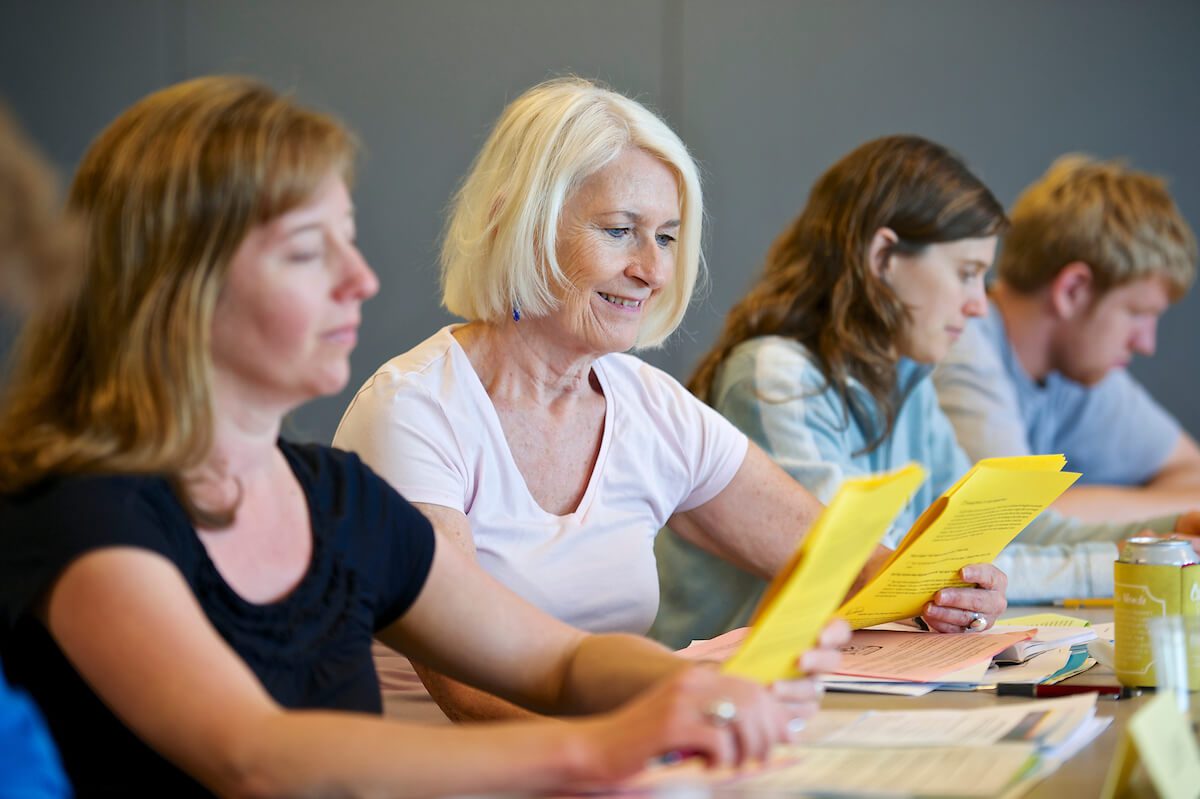 If there’s anyone who could claim to be too busy to attend a writing retreat, it’s probably Christine Virnig. The pediatric allergist splits her professional practice between three Wisconsin clinics, is a wife and mother of two and coaches a middle school girls’ volleyball team.

But this year, she’s taking on an additional role: keynote speaker at the University of Wisconsin–Madison’s 22nd annual Write-by-the-Lake Writer’s Workshop & Retreat, June 15-19.

Writers of all levels will meet in a professional, friendly, creative atmosphere. Leading educators and writers from UW–Madison and across the country will teach a variety of sessions in fiction, nonfiction, memoir and poetry.

Writing about the gross stuff

Like many good writers, Virnig writes about what she knows best from her work as a children’s physician: namely, “gross stuff” like phlegm, dust mites, boogers and poop. The self-described lover of all things disgusting relishes in swapping unsavory stories and poop jokes with kids and kids at heart.

Her first book, Dung for Dinner, will be published this summer by Henry Holt and Co.

“It’s a stomach-churning look at the animal poop, pee, vomit and secretions that people have eaten and sometimes still do,” Virnig explains. “It’s chock-full of history and medicine and a ton of gross facts.” A sequel, Waist Deep in Dung, is set to come out in 2021.

She’ll talk about her book and her journey as a writer in her Write-by-the-Lake keynote.

“I plan to focus on the lessons I’ve learned along the way that have really propelled me forward,” she says. “My hope is that at least one person in the audience will hear one of the tidbits and have a major aha moment. And if nothing else, I hope that hearing the success story of a fellow attendee will be an inspiration to all.”

Finding help from an expert

A two-time participant of Write-by-the-Lake, Virnig credits much of her success as a published author to the annual workshop.

“I first attended in 2015. At the time, I was writing fiction and my main goal as a full-time physician, wife and mother was simply to get away from the craziness of day-to-day life and focus on my writing,” she recalls. “It was blissful.”

She attended again in 2018, when she took Laurie Scheer’s course on writing and selling creative nonfiction. It proved to be the ideal class for Virnig, who was struggling to find information on writing a nonfiction book proposal.

Scheer, a former movie and television executive, is director of UW–Madison’s popular Writers’ Institute, lectures and teaches nationally on media and writing, has published two books and serves as founding editor of The Midwest Review literary journal.

Virnig says one of the best parts of the class came after the conclusion of Write-by-the-Lake, when participants submitted nonfiction book proposals directly to Scheer for feedback.

“That was huge,” Virnig says. “It gave me the confidence to pull the trigger and send my proposal out to agents. Without her push, I’m sure I would have spent months, maybe a year, writing and rewriting each and every part of the proposal. Taking her class saved me so much time!”

She encourages other new, emerging and established writers to attend Write-by-the-Lake.

“Writing can be really isolating, so it’s great to come together and learn as a group. The classes at Write-by-the-Lake are small enough that you get tons of one-on-one attention from your instructor, while also getting to know your fellow attendees. It’s wonderful to get instruction in the morning and then have the afternoons free to write, implement what you’ve learned and simply enjoy the beauty of Madison.”

This year, Scheer will present her first-ever master class on nonfiction writing at Write-by-the-Lake. It examines the elements needed in producing the first 50 pages of any nonfiction book.

“We will read each other’s pages, provide feedback and proceed through a revision draft,” Scheer says. “Additionally, writers will begin composing their book proposals, an essential tool for selling nonfiction manuscripts in today’s marketplace.”

With an influx of nonfiction writers at recent UW–Madison writers’ conferences and workshops, it’s a timely topic. Unlike fiction writing, where a writer might submit a manuscript to a publisher, nonfiction writing requires an entirely different path to publication.

“The book proposal writing process requires writers to complete a thorough search of all books within their field and defend why their book is different. This helps the agent and publisher know why the proposed book is not only interesting but also necessary.”

Virnig offers her own motivation to other writers considering Write-by-the-Lake. “Come, write, learn. And as incentive, I promise to include at least one poop joke in my talk.”

COVID updates: At time of publication, Write-by-the-Lake is scheduled to proceed as planned. Should any changes occur, registrants will be contacted and refunded. Read more about the status of Continuing Studies programs.