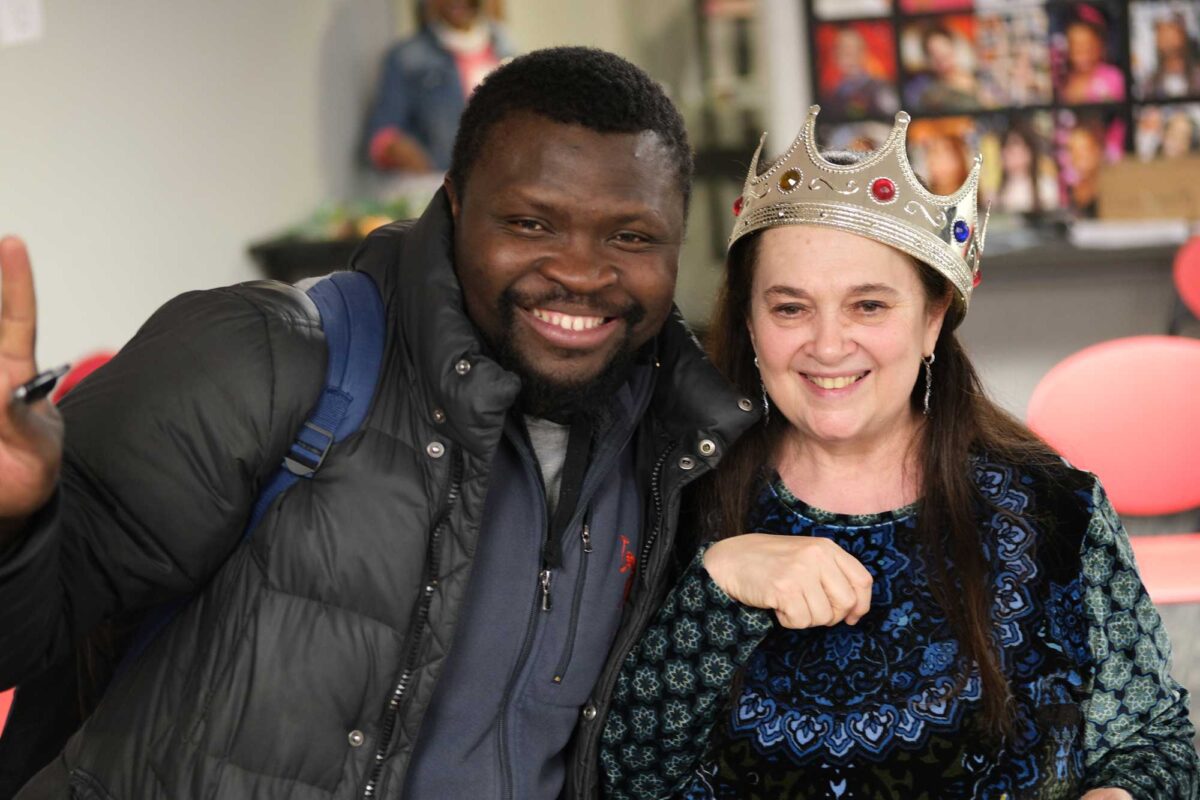 In his village of Koumea in Togo, Africa, 8-year-old Hezouwe Walada watched nearly half of his community—including three of his young cousins—die of malaria in early 2000. He decided then and there he wanted to become a doctor.

But his dream seemed unattainable—his family was poor, the nearest school was far from his village and he didn’t even have shoes.

After 20 years, nearly 6,000 miles and a host of trials and tribulations, Walada started at the University of Wisconsin–Madison as a first-year student majoring in biochemistry this fall, with plans to eventually go to medical school.

“Everything is possible if you are willing to work hard and sacrifice,” says Walada, a graduate of both the UW Odyssey Project and Badger Ready. “All you have to do is believe and keep asking questions.”

From Togo to Madison

As a young child, when Walada made up his mind that he wanted to someday study medicine, he asked his father if he could attend school. He could, his father said, but not before he did morning chores. So Walada woke up 3 a.m., worked on the farm for three hours, walked 15 miles to school then walked 15 miles home at the end of the day.

“When I finished my chores, I started running to school,” he says. “I just really wanted to be a doctor and help people in my village and around the world.”

Walada studied hard and got admitted to one of the best high schools in Togo. He moved away from home and all he ever knew.

“I felt different because all my classmates had nice clothes, nice shoes and money,” he says. “I came there with two shirts, three shorts and one pair of shoes. Even though I was at the top of the class, I felt like I didn’t belong there. I was always sad because I didn’t have anything.”

But Walada persevered and eventually won a visa to go to the U.S. At age 17, he left his country for the first time, alone.

“I was terrified, but I kept reminding myself of my dream,” he says. “I knew people needed me to become a doctor. I will never forget the suffering I saw in my village. I still have flashbacks today.”

In 2009, Walada made it to Madison. Years before, he’d heard a teacher say that the University of Wisconsin–Madison was a prestigious institution. He did research online and decided to set his sights on becoming a Badger.

But his dream was delayed 10 more years.

Lacking resources and knowing very little English, Walada struggled in Wisconsin. He enrolled at Madison College, but without a stable home or sometimes even food to eat, his education stalled. He started “working like crazy”—mainly as a caregiver—to earn and save money. He met his wife, settled down and they had a daughter.

Walada began to wonder if he could ever return to his dream of becoming a physician, but he refused to give up. Then, someone told him about the Odyssey Project.

In 2017, Walada applied to the UW Odyssey Project, a six-credit English literature course that helps low-income adults get a jump start at earning college degrees. Odyssey became Walada’s reentry into living his dream.

“When I learned that I got into Odyssey, I was so happy,” he says. “Odyssey gave me friends, taught me how to be confident and showed me I can defy the odds and make my dream come true. I needed Odyssey to become the person that I am today.”

Through reading, writing about and engaging in lively discussions of Emily Dickinson, Martin Luther King Jr, Walt Whitman, Shakespeare, Lorraine Hansberry and more, Walada found his own voice and found another family in his fellow Odyssey classmates. He heard stories that sounded similar to his own, learned more about slavery and was inspired to fight against injustice and for equality in the U.S. He shared stories from his culture and home country.

“Odyssey was my family, not just school. Everyone was so welcoming, and I felt that I wasn’t alone anymore,” he says. “Odyssey really taught me about life, about ambition and about how to gain confidence to be what I want to be.”

Walada then found another opportunity to keep making progress toward his dream: the Badger Ready program.

In 2019, Walada entered the Badger Ready program, which helps adult students make the transition to college by supporting them through tailored UW–Madison coursework. As a University Special student, and scholarship recipient, Walada, who speaks seven languages, immersed himself in an English 100 class first semester.

“I was so excited that I was finally here, I went to the classroom the night before class and picked out where I wanted to sit,” he says. “I sat there alone in the classroom and thanked God for this opportunity and this journey.”

Second semester as a Badger Ready student, Walada took Biology 130. He was devastated when he got a 50 percent on his first exam. But his Badger Ready advisor encouraged him to ask questions and visit the professor during office hours. He did—after every lecture—and came out of the class with an A.

Walada successfully completed his program requirements in three semesters and was ready to apply as a transfer student to UW–Madison for fall 2020.

“I’m on a mission here in the U.S.,” he says, adding that he does see the injustice in America and vows to work against it. “This is a great country, and if I have an opportunity, I will take it. I want to give something back to this country, to Africa, to the world.”

Closer to a dream come true

As a newly admitted transfer student amid an unstable time, Walada is now an undergraduate majoring in biochemistry with a pre-health focus.

“I am ready,” he says, adding that he’s been studying all summer to prepare for the classes he is taking this fall. “I can’t believe this dream is coming true.”

After his undergraduate studies, Walada wants to attend UW–Madison’ School of Medicine and Public Health to study cardiology.

Where does he see himself in another 20 years? His dreams remain big and judging by his path so far, anything is possible: “I hope to help my country make changes to the medical system, maybe I would help other communities around the world, too, through Doctors without Borders.”

In the meantime, Walada plans to enjoy his time at UW–Madison, getting involved in a pre-health group, social justice organizations and with the Black community. He wants to relish his achievements, continue to work hard and pay it forward.

“You cannot understand how thrilled that I am to be a student here,” he says. “My advice to people fighting for their dreams is believe in yourself. Seize opportunities. Fight for your moment because it is going to come for you.”