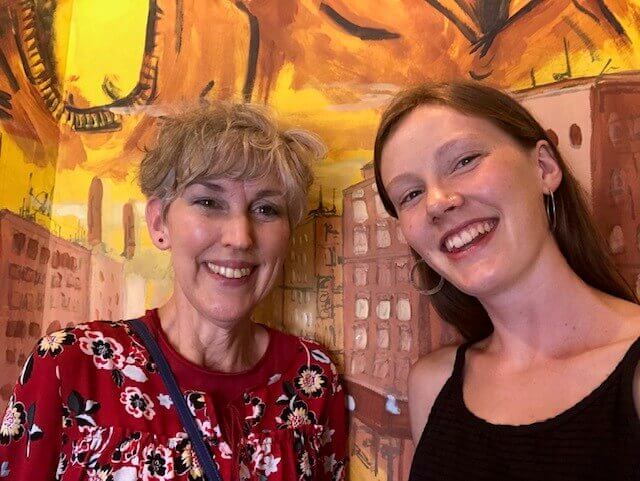 Claire Cambray and Kathryn Morrison share a love of Spanish language and culture. They met in a UW–Madison Continuing Studies Spanish course in the fall then met up again at a quaint café in Costa Rica this winter.

“Our short films class had a wonderful end-of-term dinner party where we shared email addresses to keep in touch,” Morrison said. When she decided to attended a language school in San José, Costa Rica, she contacted Cambray, who was there teaching English. They met up, walked through the University of Costa Rica campus, and ended up at a local coffee shop drinking smoothies.

“We talked about teaching because Kathryn taught for 14 years, and I’m teaching now,” Cambray said. “She helped me go through my lesson plan, which was so kind. I found community in that Spanish class, and seeing Morrison in San Jose was such a cool experience.”

“It is wonderful to watch students work hard as a team inside the classroom, but even more exciting to see how they take what they have learned and the relationships made outside the walls of the university,” said Julie Dahl, faculty associate and Continuing Studies director of language programs in Spanish, Portuguese, German, Korean, and Chinese. “Our language classes generally have a large mix of ages from people in their 20s to 70s, which is part of what make them so rich. We don’t just have a good language program, we have a good language learning community.”

Cambray took the Spanish short films course after graduating from high school and before moving to Costa Rica. Morrison is a regular in Continuing Studies’ Spanish program, having taken three levels and courses on film and women authors as well as joined the Spanish book club.

Both found the Spanish courses to be useful and fun.

“I really enjoyed how open and easy the conversation in class felt,” Cambray said. “My classmates were very motivated and kind so it was easy to put myself out there and speak, which is often hard in language classes. It was good practice for the real-life discussions I’m having now with people in Costa Rica.”

Morrison moved to Madison in 2015 after teaching in China for two years. Continuing Studies Spanish courses helped her brush up on the language and meet new people.

“The instructors are prepared, engaging, and professional,” Morrison said. “Spanish classes inspired me take a trip and introduced me to stimulating people.”

Cambray and Morrison agreed that their Spanish courses fostered community.

At their class dinner party, they spoke the language and shared Spanish food. Morrison said she’s spent time with students outside of class reading books in Spanish and attending flamenco performances.

And the class sparked their friendship. Cambray and Morrison plan to stay in touch.

“The Continuing Studies Spanish course kept me practicing and learning Spanish before I moved to Costa Rica, and it introduced me to Kathryn!” Cambray said. “I can’t wait to meet back up with her and practice our Spanish when I’m back in Madison.”

Visit the Continuing Studies Spanish page for more information on courses offered this summer and beyond, or contact Spanish faculty associate Julie Dahl at julie.dahl@wisc.edu or 608-262-5929.