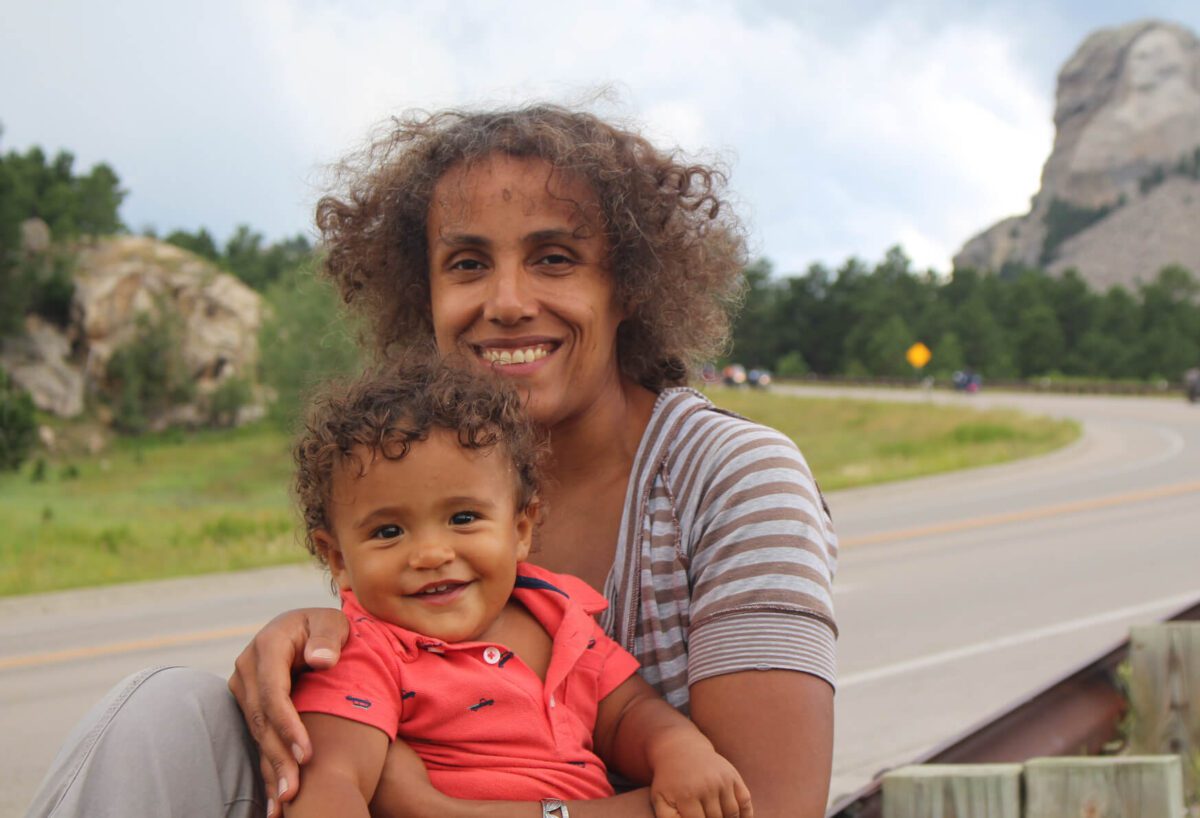 Garza-Noriega, 27, will graduate in December with a bachelor’s degree in rehabilitation psychology and special education so he can support his family and honor his parents, who migrated from Mexico to Madison to provide their children with opportunities they never had. He’s intent on using his degree to serve young students of color.

Globacheva (pictured above with one of her five children), 42, is in her last semester of study for a bachelor’s degree in nursing. An ethnic minority and immigrant from Russia, she moved to Madison to pursue an education that would help support her family of seven. Her dream is to get a graduate degree and become a midwife for vulnerable women.

For their exceptional efforts and exemplary service, Garza-Noriega and Globacheva are each receiving an Outstanding Undergraduate Returning Adult Student Award from UW–Madison.

“I’m happy I was recognized with this award,” says Garza-Noriega. “But if I could give this to my parents, I would. These are the people who deserve it, my parents and the folks in the shadows who’ve had to operate in silence. This award is not just for me but for an entire community of people who don’t have opportunity and resources.”

Each spring, UW–Madison Adult Career and Special Student Services recognizes the determination and leadership of returning adult undergraduate students with scholarships and awards. Due to the pandemic, the 2020 awards event was cancelled. This April, Garza-Noriega and Globacheva will gather with a small group of fellow students to celebrate at an outdoor, socially distanced ceremony on campus.

Garza-Noriega faced an uphill battle early on in his education.

His mother didn’t complete the third grade and his father didn’t get through high school. They fully supported his education, but it was difficult for them to know what he needed. Unfortunately, local public schools didn’t meet his needs, placing him in a subpar ESL program and treating his second language as a point of deficit. In high school, he taught himself how to read, but graduated feeling inferior.

He received little support from high school counselors in pursuing higher education, but Garza-Noriega enrolled in Madison College with the help of a relative.

“I struggled immensely,” he says. “Coming in as a first-generation college student and not knowing anything about financial aid landed me with debt. I had to spend a few years out of college to pay for it.”

On the other side of the globe, Globacheva was a teenager in the 1990s when the Soviet Union collapsed. She recalls empty grocery store shelves and spending hours in line for food. Although she moved each year and had to adjust to new schools and marginal public education, she performed well.

Globacheva loved science, but her parents wanted her to study the humanities in college. In Russia at that time, students had to pay for private tutoring to get into college. Her parents’ friends tutored her in the humanities at a reduced rate, so she majored in public administration at Moscow State University.

Globacheva did well but wasn’t interested in that course of study. She dropped out after four semesters, married her boyfriend and started a family. Her education came to a halt.

Garza-Noriega joined the U.S. Marine Corps, returned from training and finally gained a support network to help him continue his education. He found mentors through TRIO Student Support Services at Madison College. He raised his GPA, got involved on campus and in the community and entered UW–Madison in 2019.

While balancing family, jobs, military service and even contracting COVID-19, Garza-Noriega has been on the dean’s list every semester since enrolling. He’s also a 2021 UW–Madison McNair Scholar. In addition, he’s found time to volunteer with The River Food Pantry and Catholic Multicultural Services.

“It definitely has been hard,” he says. “We’ve had a lot happen financially and emotionally. COVID really took a toll.” But he persevered — for his wife, daughter, son and for his parents who worked so hard for him and his siblings that they now face physical ailments from manual labor.

Back in Russia, Globacheva got a degree in midwifery from a community college and started practicing first under an obstetrician then privately. She worked mostly with privileged women who could afford extra services, but she witnessed obstetric violence against minority populations that she’ll never forget. She yearned to make midwifery available to all, but she didn’t have a clear path.

Then she won the “lottery” through the Diversity Immigrant Visa (DV) Program. “It was the chance of a lifetime,” she says. At age 36, she migrated to the U.S. with her family, enrolled at Madison College and eventually became a registered nurse. Life here has not been easy as student with a full-time job and five children ranging from age 20 to 2 months. But, she adds, “I do not regret this long road that I have taken to get my first undergraduate degree.”

Garza-Noriega aspires to get a PhD in counseling psychology and eventually provide services to middle and high school students who struggled like he did, particularly those of color and from underserved communities. He chokes up a bit when he talks about the sacrifices his parents made to support his education, and he wants to pay it forward.

“My parents have given up so much,” he says. “But it got us closer to being recognized and getting our stories heard. I know this isn’t going to stop with me. I will be opening the doors for more folks to come through.”

In addition to his family, Garza-Noriega acknowledges other sources of support as a returning adult student: UW–Madison Chican@ & Latin@ Studies, the Office of Child Care and Family Resources and the McBurney Disability Resource Center.

“One thing I’ve learned is that adult students like myself should ask for help right away. Create a document with resources and get yourself a support network,” he says. “Enhance your journey at your institution and once that happens, your community will start to fall in place.”

For Globacheva, it was difficult at first to ask for help.

“In Russia, it’s a last resort to ask for help from your superiors. But now that I’ve been here for six years, I have learned it’s normal to find support from instructors and institutions. There are really a lot of people out there who want to be helpful,” she says.

Globacheva advises other returning adult students to plan ahead, get your family on board and be present with them as much as possible: “It’s important for them to see me invest in my education and in our community, but I never tell my children I am too busy for them.”

After her graduation from UW–Madison, she’s hoping to enroll in a master’s in nursing program at the University of Cincinnati to further study midwifery. Globacheva sees herself working in a small rural or inner-city hospital to support low-income, minoritized and teen mothers. Eventually, she’d love to earn a doctorate and teach midwifery.

“I’m a late bloomer,” Globacheva says. “Because I was 36 when I moved to the U.S. to start over in school, I received a lot of feedback that I was too old and it was too late. But I don’t think age should preclude someone from pursing their dreams. Don’t be scared to think outside of the box. Things that seem impossible can become possible.”