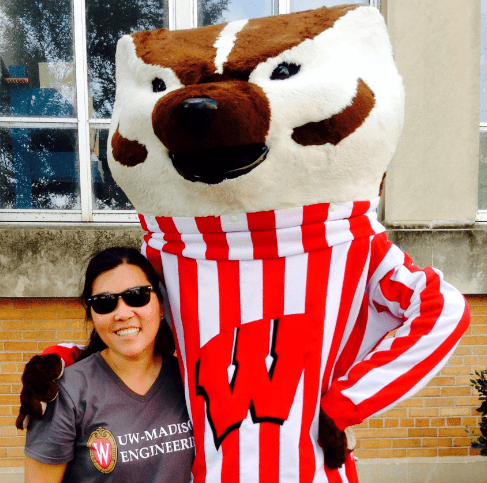 Patrick M. Dunn enlisted in the U.S. Marine Corps during high school and later suffered serious injuries during his third deployment in Iraq. He found work after an honorable discharge but eventually decided to fulfill a dream by going back to school at the University of Wisconsin-Madison. He has distinguished himself as a microbiology student despite struggles with post-traumatic stress disorder and other challenges related to his wartime service.


Preferring work to school, Jolene Enge left college after only a few semesters. Years later, she decided to return to school to make a better life for herself. She studied hard enough to get accepted to the UW-Madison Biomedical Engineering Department—not an easy task for an adult student helping to raise a child.
Enge and Dunn have both won Outstanding Undergraduate Returning Adult Student Awards for their determination in continuing their education. Since 1981, UW-Madison’s Adult Career and Special Student Services has presented the annual awards to two people who’ve resumed their academic careers after a significant interruption and have arrived at senior status while juggling all the demands of adult life. They have also demonstrated a commitment to the community through leadership or service.
Enge and Dunn will be honored at a reception on Tuesday, April 28, at Varsity Hall in UW-Madison’s Union South, 4:30-6:30 p.m. Each will receive a $1,000 award, and runners-up Case Dunphy and Anna Melville will receive $200 awards. The reception will also recognize winners of other adult student scholarships and awards, which are generously supported by donors.
Dunn is the first veteran to win an Outstanding Undergraduate Returning Adult Student Award.
“Patrick is a model student, as evidenced by his Student Research Opportunity grant in Microbiological Sciences,” says UW Entomology Professor Walter Goodman. “His work ethic is outstanding; he has juggled several jobs while maintaining a full course load in microbiology.”
Enge also has an extraordinary work ethic, according to UW-Madison adviser John Puccinelli. “Returning to school was not always easy for Jolene, but she persevered, often having to sacrifice time at home with her family for evening labs or courses. She has worked very hard, both academically and in extracurriculars, to gain the full experience a research institution has to offer.”