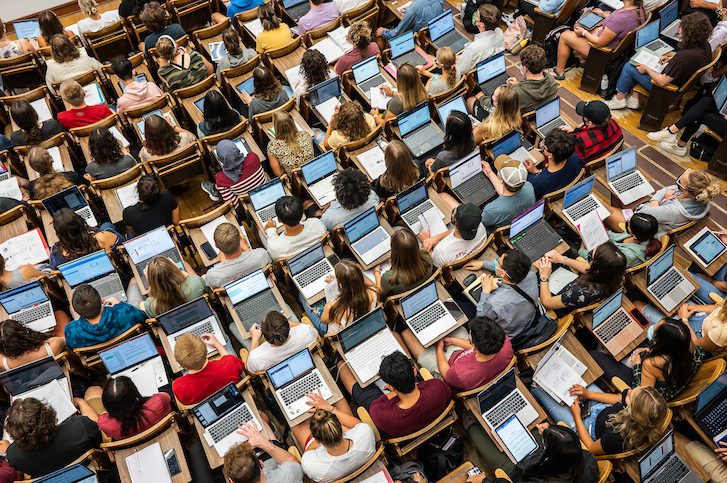 Todd Johnson has spent his life pushing himself and encouraging others. As a 17-year-old athlete, he played youth basketball for Bo Ryan and Greg Gard, who stressed the importance of striving for something more than oneself. Since graduating from Madison College, where he played on the school’s basketball team, Johnson has held professional roles as a college basketball coach, special education assistant, restaurant manager and firefighter.

But when he returned to college to complete his degree at UW–Madison in his 40s, even Johnson had some doubts about how he could fit into a classroom with mostly younger undergraduate students.

Recalling a promise he had made to his aunt and former academic advisor Diane Johnson that he would complete his four-year degree and vowing to finish what he started, Todd quickly found his place — and his mission — as a returning adult student.

According to 2021 findings from the U.S. Census Bureau, 14.9 percent of the population age 25 and older has completed some postsecondary education but not a degree. An increasing number of these students are returning to school and bringing a wealth of knowledge and experience to undergraduate classrooms.

“I think the other students in the class learn from my skills as an artist,” says Johnson, who is working on a degree in fine arts and taking courses in special education. “And I try to encourage them in their work and learn from their skills as well. Being an older student heightens your sense of urgency to learn in the classroom and to finish your degree so you can move to the next chapter of your life.”

Johnson, who also works as a residential counselor in a group home, says the urgency to learn has taught him how to be “comfortable with being uncomfortable” in the classroom. “I have the motivation to be in class and ask questions. It’s a good thing because it forces you to open yourself and be involved and attentive.”

Connected to the community

Nidia Bañuelos, assistant professor of adult, continuing and higher education at UW–Madison, notes that adult students bring a host of benefits to the classroom experience.

“In my experience teaching working adults, I notice that they consistently connect course content to the issues they are encountering at their jobs and in their communities,” says Bañuelos.

“Because adult students are connected to the community in ways that are different from their younger counterparts, they can write unique and exceptional research,” she says, citing an example of one of her adult students — and also a parent — who interviewed Black teachers in Madison about their motivations and experiences in the schools. In doing this type of research, Bañuelos says, “it helps to be a parent who is concerned about the diversity your children are encountering in the classroom.”

She adds that because adult students often have many responsibilities outside the classroom, they also offer a good reminder that every student — regardless of age — needs to be supported as a whole person.

Johnson, who is considering career options in fine arts, special education or coaching, is inspired to persevere as an adult student, recalling his former coach’s lesson that journey is about something bigger than the individual. “Coach Gard encouraged me to return to school not only for myself but also to give back,” says Johnson. “You never know where you might end up or who you might influence or impact along the way.”

The Lifelong Learner is a monthly feature written by UW–Madison’s Continuing Studies staff. Autumn Sanchez, UW–Madison adult student advisor, can be reached at autumn.sanchez@wisc.edu. An edited version of this article first appeared in the Wisconsin State Journal on January 8, 2023.