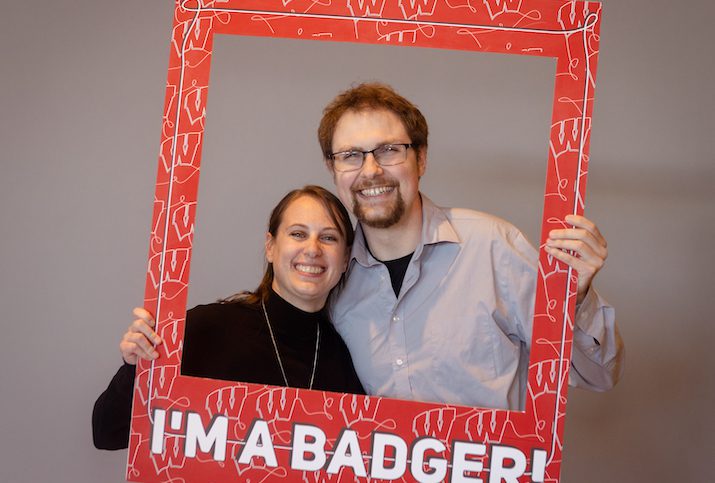 Helping adult students return to college is the most satisfying part of my job, but hearing about how the decision has positively impacted a student’s life is the most rewarding.

One such student, Tyler Johnston, was academically dismissed from his first university after struggling financially and personally. He moved with his wife to Wisconsin, took a year while working at a warehouse to become physically and mentally healthier, then enrolled at UW–Madison through the Badger Ready program. Tyler earned his degree in 2021. He shared some of the challenges and rewards of his experience as a returning student:

Tell us about your initial experiences with college and what made you decide to enroll at UW–Madison.

My first attempt at college was an exercise in brute force. I would consistently retake challenging courses until I could earn a passing grade. By the time I was academically dismissed, I had run out of retakes — but I had also earned three-quarters of the credits I needed to graduate, and I wouldn’t allow myself to give up after all that effort.

My application to UW–Madison as a regular transfer student was rejected. I wasn’t sure what my course of action would be until a relative sent me an article about Badger Ready [a program for adults who may not qualify for transfer to UW–Madison due to previous academic history]. I went to campus knowing it was likely the only chance I had left to finish my degree, and this shaped my every interaction. The inner voice that would make excuses for unhealthy behaviors before was drowned out by the weight of what was at stake.

In addition to being admitted to UW through Badger Ready, you received free tuition through Bucky’s Tuition Promise. What do these programs mean to you?

I can’t stress enough the impact of Badger Ready and Bucky’s Tuition Promise. The Badger Ready program gave me another shot at school that I likely wouldn’t have gotten otherwise. Badger Ready’s staff eased me back into school when my self-confidence was wavering, giving me a chance to prove to myself that I was capable. Bucky’s Tuition Promise allowed me to finish my degree at UW without drowning in loans. I owe so much of my future to these programs, and I am so incredibly grateful.

How has earning a degree impacted your life?

When I initially started my degree program, I had a lot of financial uncertainty in my life. I wanted job security more than anything, so computer science was a pragmatic choice. I finally snagged the degree in December 2021 and received a job offer the following spring as a software developer for Esker Inc., where I’ve been ever since.

Every “next step” of my and my wife’s life had been waiting on my degree. We are now trying for our first child and by next February should be able to start shopping for a house. For the first time in our adult lives, we have financial security. These are all things that have been afforded to us by my degree and the job that followed.

Returning to college as an adult is not only possible, it’s increasingly common. Contact your college of choice and ask what programs they offer to accommodate returning adults. You can help students like Tyler meet their academic and professional goals by donating to one of our returning student scholarship funds at acsss.wisc.edu/give.

The Lifelong Learner is a monthly feature written by UW–Madison’s Continuing Studies staff. Ace Hilliard, an educational counselor, can be reached at ace.hilliard@wisc.edu. This article first appeared in the Wisconsin State Journal on November 13, 2022.

Above image: Tyler Johnson and his wife at an awards reception for UW–Madison returning adult students.