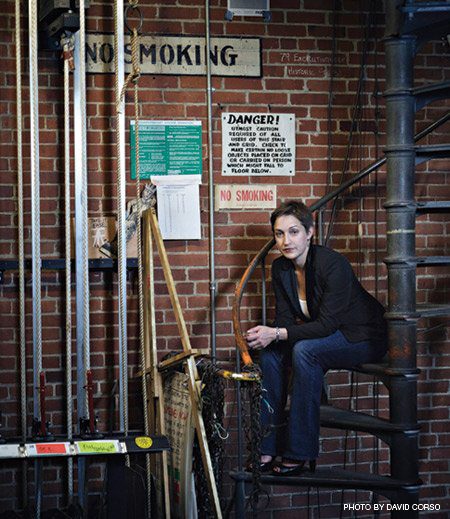 Sarah Marty enlisted Irving Berlin to celebrate community theater at a recent meeting of the Downtown Madison Rotary. Quoting “There’s No Business Like Show Business,” she made a passionate case for supporting the troupes that entertain and enlighten local audiences.

Marty defined community theater as theater that is made by, with, and for the community. “It’s theater that showcases local talent onstage and backstage and is responsive to the community in which it exists,” she said at the Rotary’s January 20 meeting in the Alliant Energy Center.

Along with serving as producing artistic director of Four Seasons Theatre, Marty coordinates theater, arts management, and dance programs at the University of Wisconsin-Madison Division of Continuing Studies. Her talk touted the achievements of local theater while also describing daunting challenges in the current arts environment.

Among the achievements is a theater scene that compares favorably to those in larger cities, according to a 2013 City of Madison task force. Marty is clearly proud of the outstanding productions by such troupes as Children’s Theatre of Madison, University Theatre, and Forward Theater Company. She gave examples of talented Madisonians who’ve gone on to make a mark nationally—a testament to the high-quality educational opportunities available to local artists.

In “There’s No Business Like Show Business,” Berlin notes that show people “smile when they are low.” Marty herself remained optimistic while acknowledging sobering realities about local community theater, including declining government support and increasing competition for limited resources. She’s determined to “go on with the show”—and judging by the supportive response of the Downtown Madison Rotary, she has an army of civic leaders on her side.

See the video above for Marty’s complete presentation, and contact her about Continuing Studies courses at sarah.marty@wisc.edu, 608-263-2790.