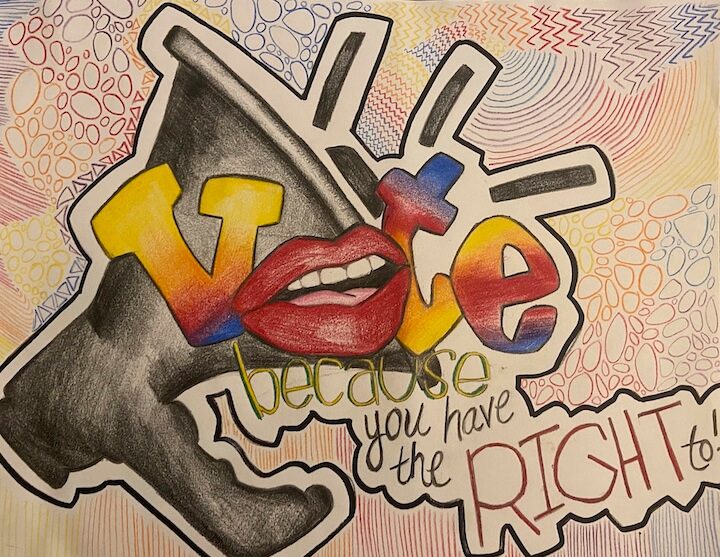 For Hedi Rudd, the decision to vote is both personal and powerful. In her award-winning essay for the 2020 “Why Vote?” project contest, she writes of the significance of her vote:

For more than a decade, the “Why Vote?” contest has asked current and former students of the University of Wisconsin–Madison Odyssey Project to create an original work that convinces people to get out the vote.

The contest is a prelude to the nonpartisan event, “A Celebration of Voting,” which this year takes place online, Saturday, October 3, from 2 to 3:30 p.m. The celebration is designed to share voting information with attendees; representatives from The League of Women Voters will be on hand to answer voting questions.

A robust, inspiring program will feature Rudd and other Odyssey Project students and alumni, who will share their award-winning essays, poems and artwork, as well as short presentations on voting by prominent local leaders and actors, including:

The event is free and open to the public. Those interested in attending should complete the online registration form for access to the Zoom link.

“A Celebration of Voting” is presented biennially by the UW Odyssey Project, a program that empowers adults to overcome adversity and achieve dreams through higher education. Each year, the Odyssey Project offers a free two-semester humanities class for 30 adults, providing textbooks, childcare and a weekly dinner. They earn six credits in English from UW–Madison, as well as gain critical thinking skills and a sense of empowerment. Many go on to complete a college degree and find meaningful work in the community.

Odyssey Project Director Emily Auerbach says that the “A Celebration of Voting” event is a natural complement to the program, which strives to help students develop and use their voices.

“Civic engagement has been one of Odyssey’s goals since its beginning in 2003,” Auerbach says. “We want to encourage our students, their families and the broader community to become excited about voting, get practical information about how to vote and use the power of their own voices to convince others to vote.”

Stanley Sallay, Odyssey ’07, used the power of the pencil to create his award-winning illustration for this year’s “Why Vote?” contest. Replete with symbolism and detail, his drawing is largely a study of those who neglected to vote. The central figure, Sallay writes, “is a man running as if he’s in a rush. ‘I don’t have time to figure out who’s running and vote.’ The road that he’s running on is broken and leads to nowhere…. The pair of dice near his feet is showing how he’s choosing to leave his future to chance.”

Sallay says the illustration was inspired by the idea of votes lost to those who are unwilling or unable to vote — or who don’t believe it’s important.

“I didn’t vote four years ago because I thought there was no way Trump would win,” he says. “Since then, I’ve wondered how many votes didn’t happen because of people who thought the same.”

For more information on the Odyssey Project, see the program website or contact director Emily Auerbach at emily.auerbach@wisc.edu. To donate to the program or become a volunteer, visit the Support Odyssey webpage.