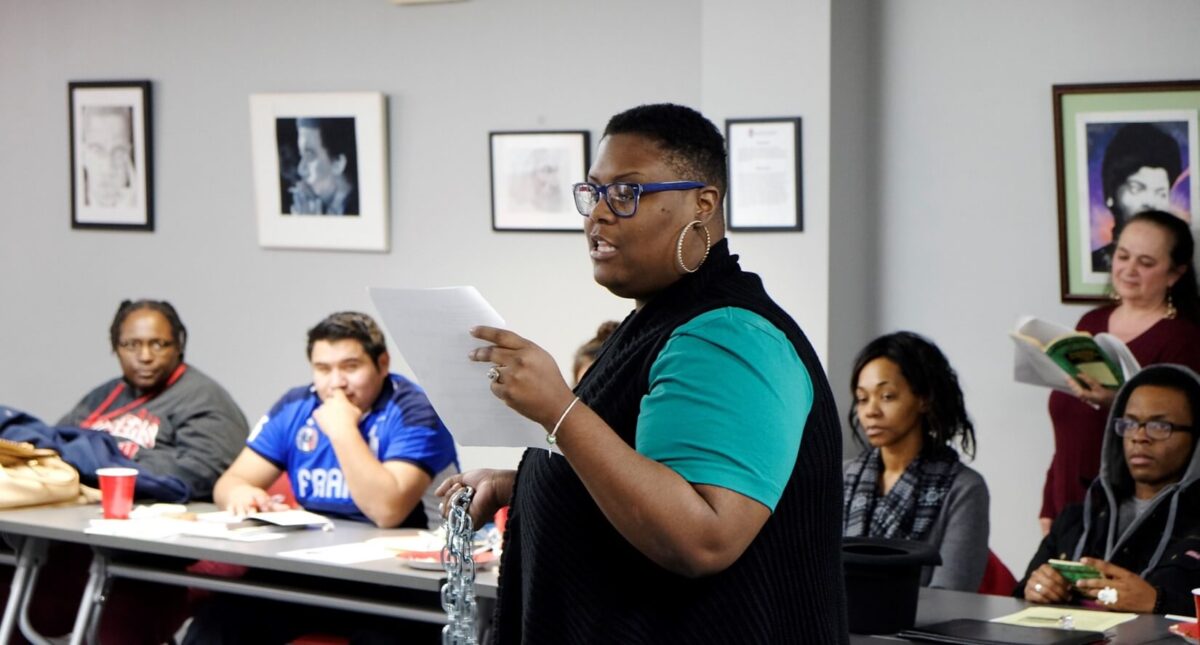 “I wish cancer got cancer and died.” This was Tandalaya Taylor’s seven-word poem for a class assignment through the Odyssey Project at the University of Wisconsin-Madison.

The Odyssey Project provides a free humanities class for people facing barriers to higher education—whether those burdens are financial or societal. Odyssey students come from many different circumstances and communities, but all seek a way to turn the corner to new experiences, new ways of thinking, and maybe a new future.

Roadblock on the steps to the finish line

While working on an Odyssey assignment to represent her life in images, Taylor immediately draws a set of stairs.

“On the bottom steps, here’s me on my bike and jumping rope. I had a great childhood in Chicago,” she says. At the top is a black-and-white-checked finish line flag.

After classes at Harold Washington College and the birth of her son, Taylor ended up in Madison. She graduated with a 3.8 grade-point average in criminal justice at the ITT Technical Institute and was grappling with student debt, but facing it with her customary optimism. And then there was a doctor’s appointment.

“In April 2016, I was at my doctor’s office for tests because I hadn’t felt well. The doctor said I had stage four lymphoma. The next thing I know I’m in the hospital, calling my mom and crying.”

Taylor points to a large green ribbon smack in the middle of her drawing. It’s the symbol for lymphoma, an often fatal form of blood cancer.

‘Cancer showed me there’s more I should be doing’

The year brought eight rounds of chemotherapy, followed by stem cell treatments in January 2017. By fall, Taylor’s cancer was in remission and she had submitted her paperwork a bit late to be accepted to the Odyssey Project.

But fate intervened again. Another student had to withdraw, and Taylor showed up on week two of class, with her joyful laugh and abundant smiles.

Thanks to chemotherapy and a stem cell transplant, Taylor’s cancer is now in remission—and it made her realize she can soar to even greater heights.

Emily Auerbach is the director of the Odyssey Project, now in its 15th year. In that time, more than 400 students have participated. In a recent study, former graduates reported that they are more likely to read, vote, and go to college because of the program.

Auerbach has seen a lot of students show amazing resilience. Even so, Taylor stands out.

“Tandalaya is among the most positive, encouraging students we’ve ever had,” says Auerbach. “In her interview, she said she would be a cheerleader for the others in class. That’s exactly what she is.”

The graduation celebration for this year’s Odyssey class will be on Wednesday, May 2, 6:30-8 p.m. at Great Hall in the UW-Madison Memorial Union. The public is welcome to attend.

Taylor will be among the proud graduates on stage, shouting her support to the people with whom she shared this journey.

“I wasn’t sure what I wanted for myself before Odyssey and before cancer,” she says. “Now I’m ready to do some dream catching and cheerleading to get to that finish line. I just want to do everything!”

To learn more about the UW Odyssey Project or to donate, see the Odyssey website. For more information, contact Emily Auerbach, 608-262-3733, emily.auerbach@wisc.edu.