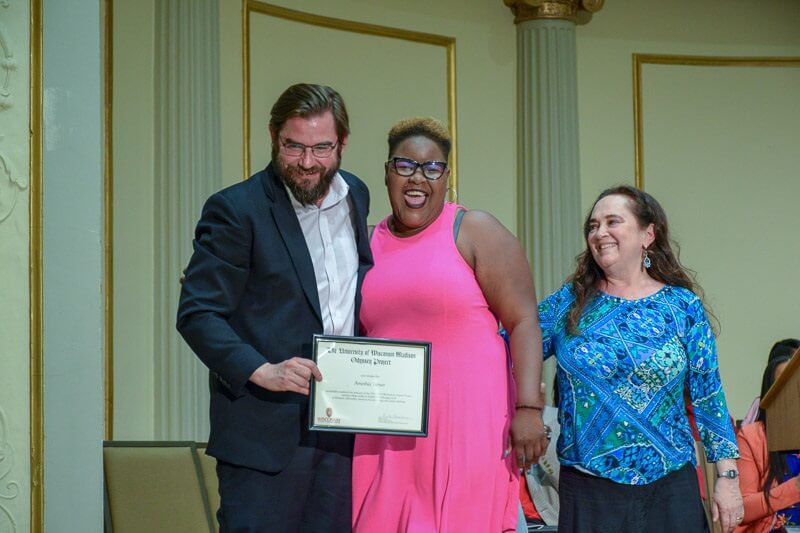 Graduation is a time to celebrate achievements from the recent past and embrace the arrival of the future. The graduation ceremony for the Odyssey Project’s 2017-18 class, held May 2 at the University of Wisconsin–Madison’s Memorial Union, was this and more for its adult students, who have faced steep educational barriers such as poverty, abuse, and homelessness.

The event was live streamed on Facebook and appeared in an NBC-15 news segment. Graduates such as Tandalaya Taylor also shared their plans for the future on video.

Now in its 15th year, the Odyssey Project provides a free, two-semester humanities course to its 30 students each week, as well as dinner and child care when class is in session. In addition to earning English credits from UW–Madison, students gain the resiliency to face life’s obstacles. This strength emerges when studying great thinkers—Martin Luther King, Walt Whitman, and Emily Dickinson, to name a few. It stems from finding their own voices, a process guided by the award-winning faculty who teach in the program.

Even more strength arrives when the students see how many people want them to succeed.

Many of these supporters were in the audience at the graduation ceremony. They included family members and friends of the students, UW–Madison faculty members and deans, program donors and volunteers, and community leaders such as Dane County Circuit Court Judge Everett Mitchell, who gave an inspiring speech titled “Reimagine the Impossible.”

Mitchell urged the Odyssey Project graduates to keep sharing their stories, noting that he struggled with reading and writing for many years before becoming a pastor and judge.

“The weight so many people bear is due to not being able to share where they have been because the tools needed to share that story are often taken away,” he said.

When other people tell these stories, the people who lived them may suffer, he added, explaining that it’s crucial for students to rewrite stories that keep them from achieving their potential.

Mitchell also encouraged the group to seek freedom—especially freedom from fear—and give others permission to do the same.

“People are looking for someone to take the first step [toward freedom], to let them know that it is possible for them to do the same thing,” he said. “The gift of Odyssey is that it has allowed you to take the risk of being vulnerable or looking silly or sounding ridiculous in an attempt to live life without fear.”

Mitchell wasn’t the only person eager to give the students a warm sendoff. Professor Emily Auerbach, director and cofounder of the Odyssey Project, congratulated the class and thanked the hundreds of donors who support the program.

“We are very proud of every student in this year’s class, and of the loving, supportive community they created, cheering each other on,” she said.

The students also stepped up to the microphone to share glimpses of their Odyssey Project journeys. Some read letters to future classes of Odyssey Project students. Others recited original poems, often in more than one language. Several delivered excerpts of speeches they’d penned. A common thread—envisioning a better future—tied them all together.

Charnice Anderson-Morris revealed that she views life a bit differently because of the Odyssey Project.

“I am not afraid of how many pages are in a book, how many syllables a word might have, or how to read a poem written in the 1800s,” she said in her letter to the next Odyssey Project class.

Victor Rojas used a poem in Spanish and English to ask a difficult question about freedom and fear:

Some animals live in the zoo,

And some animals live in the wild.

When we build walls around us,

What kind of animals are we?

One student admitted that she was nervous before starting her reading. Without missing a beat, a member of the crowd shouted “You got this!” and others clapped in agreement.

Maya Rasheed-Bracey echoed this sentiment in her reading, noting how the Odyssey Project’s family-like atmosphere helped her thrive.

“I’m never made to feel like I’ve said something dumb, and my classmates don’t laugh at the nervousness in my voice,” she said. “Because of Odyssey, I will continue my education to become an elementary school teacher. This program is truly life-changing.”

After completing their readings, each student received a certificate—and in many cases, a hug—from Auerbach and Kevin Mullen, the program’s associate director.

If these students are like previous Odyssey Project graduates, many will go on to earn college degrees and do meaningful work in the community. On average, 75% of Odyssey Project alumni continuing taking college courses, including classes the program offers, thanks to initiatives such as Onward Odyssey. The Odyssey Project also continues supporting its graduates through direct financial support and counseling that helps them work through personal issues, manage their finances, succeed in school, and navigate their careers.

Photos and video by David Giroux. In the featured photo, Tandalaya Taylor smiles as she receives her Odyssey Project graduation certificate from Director Emily Auerbach and Associate Director Kevin Mullen.