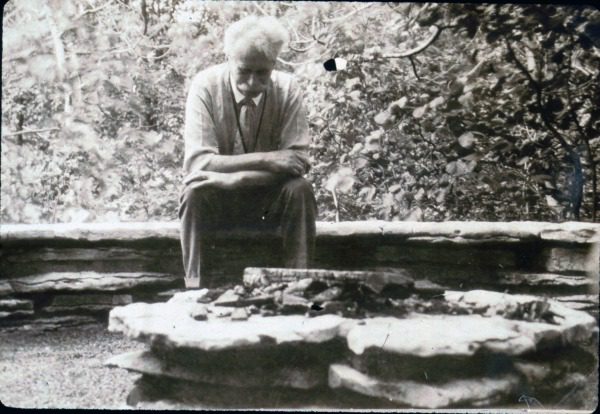 William Tishler tells the story of Jens Jensen’s first success as a landscape architect, when he was superintendent of Chicago’s Humboldt Park. In the late 19th century, most gardens in Chicago employed geometric designs and exotic plants, but Jensen took a different approach using native plants he’d collected during his explorations of the region’s undeveloped landscape.

“People loved it, and it was a great success,” says Tishler, professor emeritus of landscape architecture at the University of Wisconsin-Madison. “This got Jensen started on one of his trademarks, which was almost always using native plants in his landscape designs.”

Jensen went on to become a celebrated landscape architect, inspired by the Midwest’s natural features. He was also a conservationist and environmentalist on par with Aldo Leopold. Like Leopold, Jensen had ties to the University of Wisconsin and did groundbreaking work in the Badger State, so it’s fitting that he’s the subject of a course in UW-Madison’s 2017 Aldo Leopold Series. Taught by Tishler, Jens Jensen: A Pioneer in American Landscape Design and Conservation runs March 1-15 at the UW Pyle Center and is open to the public.

A man of great integrity

Tishler is writing a biography of Jensen and is also the editor of Jens Jensen: Writings Inspired by Nature (Wisconsin History Society Press). He feels an affinity with his subject because he grew up in northern Door County, Wis., where Jensen founded the Clearing Folk School and created brilliant Prairie Style landscape designs. Tishler has tremendous respect for both Jensen’s work and character.

“Jensen was a man of great integrity and is a role model for today’s students,” he says. “This course is for anyone interested in the out of doors, the quality of our landscape, and conservation.”

Jens Jensen: A Pioneer in American Landscape Design and Conservation will explore Jensen’s background in Denmark and his rise from street sweeper to prominent figure in the Chicago parks system. Students will learn about his designs for estates and parks and discuss their deep connection to the Midwestern landscape. Tishler will also delve into Jensen’s environmentalism, including his founding of the early conservation group Friends of Our Native Landscape.

Jensen died in 1951, but Tishler believes his approach to conservation is still relevant to our times.

“A course like this is very much needed,” he says. “This country is growing, and it’s using up the landscape in ways that aren’t always wise. We need Jensen’s vision more than ever.”

For more information, contact Jessica Courtier, jessica.courtier@wisc.edu, 608-890-3626. Signed copies of Bill Tishler’s Jens Jensen: Writings Inspired by Nature will be available on the first day of class for half-price.