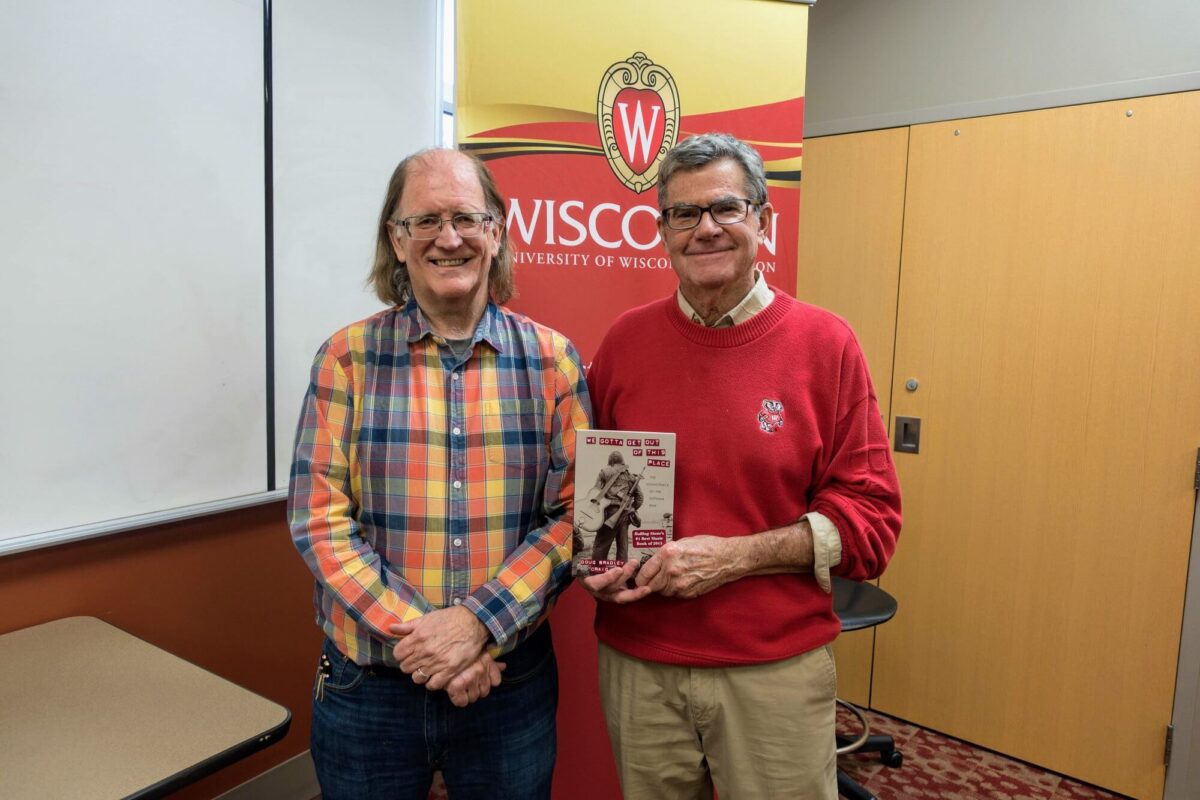 Despite having fought in the same conflict, many veterans had extremely different experiences of the Vietnam War. According to Craig Werner and Doug Bradley, authors of We Gotta Get Out of This Place: The Soundtrack of the Vietnam War, music has a unique power to unite these veterans and help them tell their stories. The authors gave a presentation about their book at Music of the Vietnam War, a lunch-and-learn event for winners of the University of Wisconsin–Madison Continuing Studies fall 2018 Lifelong Learner Giveaway.

The Oct. 27 event also featured songs Vietnam veterans experienced during the 1960s and ’70s, a Vietnamese meal from Madison restaurant Lao Laan-Xang, a question-and-answer session, and a book signing. Nearly 30 people, including several veterans, attended. See below for a gallery of photos from the event, which took place on the UW–Madison campus.

The variety of veteran experiences

Werner, a UW–Madison professor who specializes in African-American history and music, and Bradley, a Vietnam veteran who served as communications director for the UW System, hatched the idea for We Gotta Get Out of This Place while teaching a popular class about the music of the Vietnam War. They interviewed more than 200 veterans for the project, which Rolling Stone named its Best Music Book of 2015. In the process, the duo learned how important music was to Vietnam veterans of every stripe: male and female, black and white, brand-new private and seasoned officer.

At the start of their talk, Werner and Bradley argued that there is no single experience that defines the Vietnam War for veterans. This can make it challenging for veterans from very different backgrounds to talk about their service, even when they desperately need to do so. Fortunately, music can help.

“Many people are deep in mythologies of the war,” Werner explained. “They’ve created a Vietnam War that addresses their ideological needs but not the actual experiences of the veterans. That’s a big reason we wanted to place vets at the center of our story.”

The authors asked a diverse set of veterans to discuss songs that remind them of their Vietnam experiences, from moments in combat to periods of reflection.

“We found that music tells a story about Vietnam that has rarely been told, and that it connects people who maybe don’t have a lot in common, even in combat,” Werner said. “Music opens up conversations that we definitely need to have about the war, and that we might not have otherwise.”

Bradley then shared how “Tighten Up,” a 1968 R&B hit by Archie Bell & the Drells, helped veteran Tom Stern connect with African-American soldiers. As a white kid growing up in rural Wisconsin, Stern hadn’t met many black Americans before arriving in Vietnam. He quickly fell in love with music he heard black soldiers play. Stern loved to surprise others by putting “Tighten Up” on the jukebox at the U.S.O. club, and doing so helped him forge relationships with soldiers of different races.

In other cases, music provided unwelcome surprises. Werner explained how “It’s Judy’s Turn to Cry,” a 1963 earworm by Lesley Gore, was dangerous for one veteran who found that the mere memory of it broke his concentration during intense combat situations.

Bradley discussed another type of danger some songs presented: convincing people that military service would turn them into heroes. One of these songs was “The Ballad of the Green Berets,” a 1966 hit by Staff Sgt. Barry Sadler. It reminded one young UW–Madison graduate of the school’s beloved fight song and helped convince him to enlist. According to Werner and Bradley, the song taps into the widely held notion that World War II veterans were heroes for fighting fascism. For many Vietnam soldiers, it became a painful reminder that they were perceived in a much different light. As a result, it became one of the most parodied tunes of the war.

Coping with shock, fear, and loneliness

In addition to being shocked by the nature of the war they were fighting—and the public’s response to it—many Vietnam soldiers wrestled with loneliness while separated from friends and family. “Leaving on a Jet Plane” by Peter, Paul & Mary tapped into this emotion so deeply that it still resonates with many Vietnam vets today. Werner and Bradley said that, much to their surprise, veteran after veteran mentioned this song in interviews for the book. One of these veterans was Jeannie Christie, a Madison native who served as a “Donut Dollie,” providing food and emotional support to members of the Army, Air Force, and Marine Corps. Christie was the DJ for many social events at her base’s recreational center.

“At every one of these shows, someone asked her to play ‘Leaving on a Jet Plane,’ and every time she cried,” Bradley said.

Christie cried not only for her friends serving in the war but for the loved ones waiting for them at home, worried that they wouldn’t return.

Werner also told a tear-drenched tale: the backstory to Marvin Gaye’s soul track “What’s Going On” and his 1971 album of the same name. Gaye’s brother Frankie was a radio operator in the Vietnam War. He sent sobering letters about his experiences to his parents, which Gaye read regularly. When Frankie returned home, Gaye canceled his tour and dedicated himself to providing emotional support. The brothers would discuss Frankie’s war memories for hours, often crying as they consoled one another. The album What’s Going On grew out of this experience—and Gaye’s desire for Americans to take a close look at the impact the war was having on the country.

According to Werner and Bradley, What’s Going On came to symbolize several important questions many veterans had, including “Is America going to be there for me?” Werner also explained how this song provided a turning point for a troubled young veteran named Art Flowers.

“When Art returned from Vietnam, he was drinking heavily and doing a lot of drugs. When he talks about it now, he says he was wasting his life,” Werner said. “Then Art heard ‘What’s Going On’ for the first time in a college dorm room. It changed the direction of his life; it gave him purpose.”

Interestingly, the Animals were unaware of the song’s popularity among veterans until meeting a group of Green Berets during a concert tour. Singer Eric Burdon remembers feeling apprehensive when the group approached him at a bookstore. Dressed in hippie garb, he feared that he was about to get beat up. Instead, the soldiers offered him a hearty thank-you.

The crowd showed appreciation for We Gotta Get Out of This Place—and the veterans who shared their stories in its pages—by singing along to the songs Werner and Bradley played. They asked the presenters how music might be used in therapy groups and other opportunities for veterans to share their experiences and find relief from the psychological tolls of war. The authors then mingled with attendees, autographing books and posing for photos.

Want to attend another Continuing Studies author event? Enter our Lifelong Learner Giveaway for a chance to attend a brunch-and-learn with award-winning children’s author Dean Robbins. For details about the contest, prize, and rules, visit the giveaway webpage or browse our winter/spring 2019 catalog, available in the Nov. 29 issue of Isthmus.