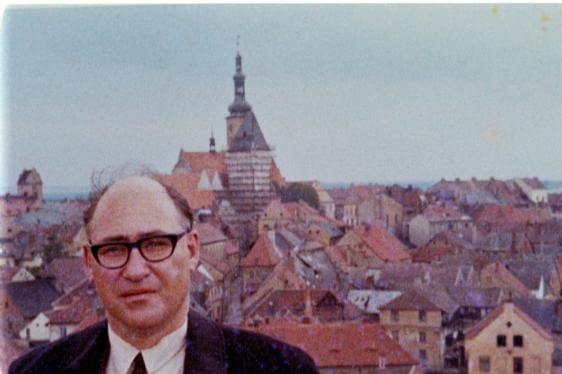 Professor George Mosse’s courses on European cultural history are the stuff of legends at University of Wisconsin–Madison. Informed by scholarly inquiry and his family’s dramatic escape from Germany during World War II, Mosse’s unique perspectives helped students see fascism and racism in a new light. Though he retired in 1987, his work is exceptionally relevant right now, with authoritarianism, hate crimes, and intolerance on the rise.

Enter “What History Tells”: European Racism, Antisemitism, and the Fate of Liberalism, 1890-1945, an online course featuring recordings of Mosse’s lectures, video adapted from his presentations, and opportunities to read his writings. The next installment, which runs Jan. 22 through March 10, brings together lifelong learners from Continuing Studies, undergraduates from UW–Madison, and students from the Hebrew University of Jerusalem. Skye Doney, a historian with UW–Madison’s George L. Mosse Program in History, facilitates online discussions to place the archival material in the context of current events.

Beyond helping students learn and connect online, last semester’s “What History Tells” course led some Milwaukee residents form a face-to-face study group that digs into Mosse’s themes and discusses their relevance in the present. In the process, they strengthened their bonds with each other and their community. Watch a video about the group—and learn more about their experience in the course—below.

“What History Tells” examines how European society labeled Jews and other groups “outsiders” between 1890 and 1945. Mosse explores this issue through two questions: How was a hatred of “outsiders” cultivated, and why were liberal democratic systems unable to counter the extremist political ideologies promoting this hatred?

Concerned about similar types of marginalization happening today, several lifelong learners began addressing the topic of outsiders in the course’s online discussions. Some of these learners knew each other from Milwaukee or from their days as UW–Madison undergraduates. Others, like Rusty Borkin, entered the fold by making astute comments.

“Peter Abbott, one of the other students in the class, has been my friend since we were both 19,” says study group member Lucy Cooper. “He and I were reading what others were saying in the online discussions, and we had the same reaction to this fellow named Rusty Borkin: ‘He’s one of us.’”

Cooper, Borkin, and a few other students from Milwaukee found each other through the course’s online forum and decided to meet in person. Before long, the study group consisted of old friends, new acquaintances, and others with valuable perspectives to add, including a Holocaust survivor and a human rights attorney. They met at one another’s houses for meals, tackling thorny topics many dinner tables eschew, from structural racism to white nationalism.

“I was interested in the course because of the rise of white nationalism,” says Abbott. “The study group gave us a place to talk about the course material’s relevance to today’s politics and how it might inform our actions in response to what is going on around us right now.”

From the outset, the group agreed to discuss analyze the factors that gave rise to European racism in the past and use their new knowledge to combat current American racism.

“When he went over popular literature that plowed and re-plowed the ground of antisemitism, it made me think about racist myths circulating in our culture and how literature perpetuates them,” she says. “Some of the books are so fun to read that you don’t realize what’s going on with those myths.”

Mosse’s discussion of racist novels made an impression on Abbott as well.

“This softcore antisemitism in popular culture opened people up to the hardcore antisemitism Nazis used later on,” he says. “In the study group, we related that to the ‘I’m not a racist, but…’ messages you find in America, which can provide a gateway to hardcore bigotry.”

While the course highlighted the influence antisemitic novels a century ago, the study group took the lesson to the next level by discussing recent examples of racism in literature.

The study group also gave Cooper, Abbott, and others a space to share honest reactions to the lectures and work through difficult feelings the material dredged up.

For Cooper, this includes the feeling that tribalism may be impossible to defeat.

“The course deepened my understanding of how very, very powerful tribalism is. Tribalism isn’t just hatred of a different race. It’s a sense of getting your own community together by defining it as being against another group. It’s the sense that it’s your group against the world, and you’re going to win this time. There’s a stoking of resentments involved, too,” she explains. “We need to think of ways to counter all of this, and I’m not sure I’ve thought of any. Not yet.”

According to Mosse, people seek a sense of safety in times of economic impasse. In doing so, some turn to racism or tribalism.

But Mosse also saw antidotes to racism and tribalism. One is the American tradition of civil service. Another is the country’s commitment to pluralism, the side-by-side existence of differing viewpoints and sources of authority. Watch the video below to hear Mosse speak about these topics.

Borkin used the study group to reflect on his Jewish identity—and the injustices he witnessed growing up in Fox Point, a Milwaukee suburb.

“The way the Nazis used the divisions within Jewish society and the way they manipulated people to fight one another to reach goal of eliminating all Jews, hearing Mosse talk about that in a very logical way was powerful,” he says. “There was no monolithic Jewish culture, and therefore there could be no monolithic Jewish resistance.”

Though people in Borkin’s childhood neighborhood remembered the Holocaust and some of its contributing factors, they didn’t necessarily use that knowledge to support racial and cultural minorities in the U.S.

“When I was a kid, we celebrated Passover, which involved telling a story about freedom and liberation each year. As I experienced that holiday, I’d watch my parents’ black-and-white TV and see black people getting fire-hosed in Birmingham and beat up in Selma. I remember the race riots that happened in Milwaukee in 1967 and the countywide curfew that happened afterward, when I was 15. Some of our neighbors began to worry about black people moving to Fox Point, and that had a big impact on me,” he explains.

Events like these pushed Borkin to explore history throughout his life. The study group provided opportunities to connect historical events not only to childhood experiences and current events but to memories of being a UW–Madison undergraduate in the early 1970s. For Borkin, these memories include taking classes with Mosse, observing protests, and being eager to change the world. Other group members who attended UW–Madison in the 1960s have connected the course’s themes to their experiences fighting for civil rights, finding ways to oppose the Vietnam War, and documenting the events of the time for a student newspaper.

But the most powerful story likely belongs to Mosse, a Jewish man who escaped Nazi Germany at the last possible moment. According to Cooper, Mosse’s personal politics never entered his courses, but it was impossible to ignore the significance of the struggles he had endured to stay alive.

“Professor Mosse didn’t just study what he was teaching. He lived it, and his whole family lived it,” she explains. “When he tells his story about getting out of Germany at 11:45 the night before the Nazis closed the borders to Jews, that’s powerful.”

For details about other Continuing Studies history courses, visit the History and Humanities page.