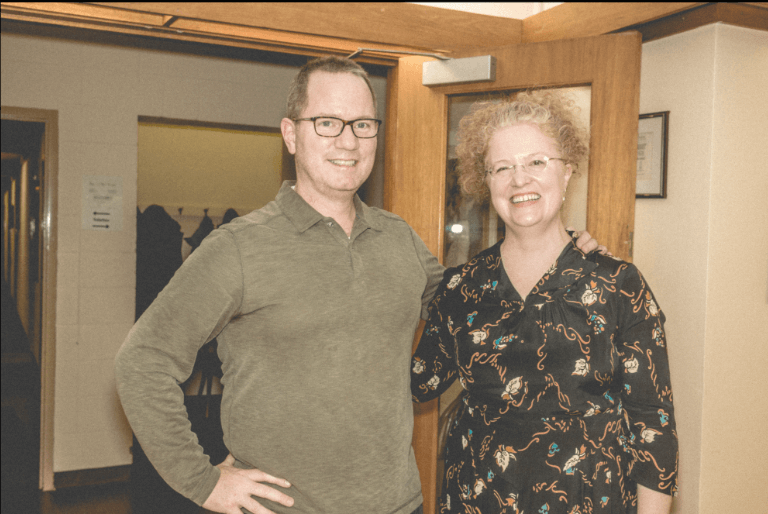 As students slide their chairs in and settle in, the delicious smells of dinner preparations waft in from the French House kitchen. Delighting in the lake view on campus, a group of adult learners open up their backpacks, take out their notebooks, and turn expectantly toward me.

It is Wednesday at the University of Wisconsin–Madison’s French House, and a group of about 30 students are preparing for the evening class. Since 2012, for 12 weeks each semester, lively and motivated groups of adults have participated in weekly, two-hour-long French immersion courses. Some come for only a semester and then move on to other horizons, but les fidèles come back each season.

These beginning and intermediate learners spend an hour participating in conversational, interactive activities in two different groups led by Dr. Andrew Irving, director of the French House, myself, and often a graduate student from the Department of French and Italian. At the buffet dinner following each class, participants continue practicing their French side-by-side with other French speakers, university students, and community members.

As I have learned in the many years creating and teaching in this program, people’s love affair with French stays with them long beyond middle age, as does their memory of their first attempts at learning it. Their sense of humor is just as strong. For instance, in the middle of class, a retired attorney says, “Je parle français comme une vache espagnole.” “Une vache espagnole?” I repeat, grinning at the group. As we review the funny idiom, they laugh, nodding their heads in agreement. They are all here because, despite the diversity of their skills, they love French.

But this group of students is not a typical undergraduate class; they are much more familiar with Jean Gabin than Jean Dujardin. And they come to class not because they have to, but because they want to.

For example, the retiree I mentioned above is a full-time caregiver for her mother with dementia. She looks forward to each Wednesday off as her chance to reconnect with her younger self, a footloose and fancy-free jeune fille au pair in 1970s Paris. Sitting next to her, the middle-aged widower takes copious notes. He has been enchanted with French since middle school, when, 50 years ago, the more popular choice was German. Another student tells me that he is learning French because he “wants to sing” when he speaks.

A student whose sister is battling cancer lets me know that she practices speaking French every day with her cats. Entranced by the word oiseau, which she repeats over and over again, as if savoring a fine wine, she exclaims, “I sound just like Jeanne Moreau!” Next to her, an 86-year-old adjusts the crackle of her hearing aid to better hear the group. She tells me that when people ask her why in the world she would start learning French at her age, she has her answer ready, “So I can speak French in my next life!”

As I get a glimpse into these students’ lives, I have come to realize that participants attend these classes to learn French, but they also come for much more.

Many of them are going through something difficult in their lives, and stepping through the doorway of La Maison Française takes them to a different place. Sometimes the most effective therapy is meeting with a group of like-minded people in the tireless pursuit of learning the futur proche. French class is a distraction, a space of companionship, healing, or bonding over a common goal. It is a haven in a chaotic world in which an hour of verb drills or vire-langues are distractions from everyday existence. Concentrating on something brand new, or revisiting an old skill, interrupts the stresses of the ordinary and leads to a more fulfilling life.

These students illuminate the importance of language and community in composing a well-lived life. Shedding their quotidian English and slipping into French, a tongue they perceive as more beautiful, full of “luxe, calme, et volupté,” allows them to leave the ordinary or the painful behind, even if it is only for a brief time each week.

For them, French conjures up a lover carrying a bouquet of flowers home on the métro, breaking off the tip of a freshly baked baguette, sharing a box of macaroons with a friend over un café. Each week, they celebrate the beauties of the French language and the ways in which its rhythms have shaped their lives. In their third chapter, these students are not furled, but rather outward turning, eager to learn and participate fully in life’s pleasures. In these ways, Wednesday evenings in French are magical.

If such a conversational group does not yet exist in your community, you can always start one by connecting with local resources in larger cities such as the Alliance Française or programs at a college or university. In smaller communities, conversational French groups can be started through the public library, a local café, or Meetup.com, which has French language groups worldwide.

For more information about French classes and other language-learning opportunities in the Division of Continuing Studies, go here. The next Wednesday-night classes begin Jan. 31.

Sage Goellner, assistant professor of French and continuing education at UW–Madison, recently received the Distinguished French Educator Award from the Wisconsin chapter of the American Association of Teachers of French (AATF). This article was originally published in the AATF National Bulletin.