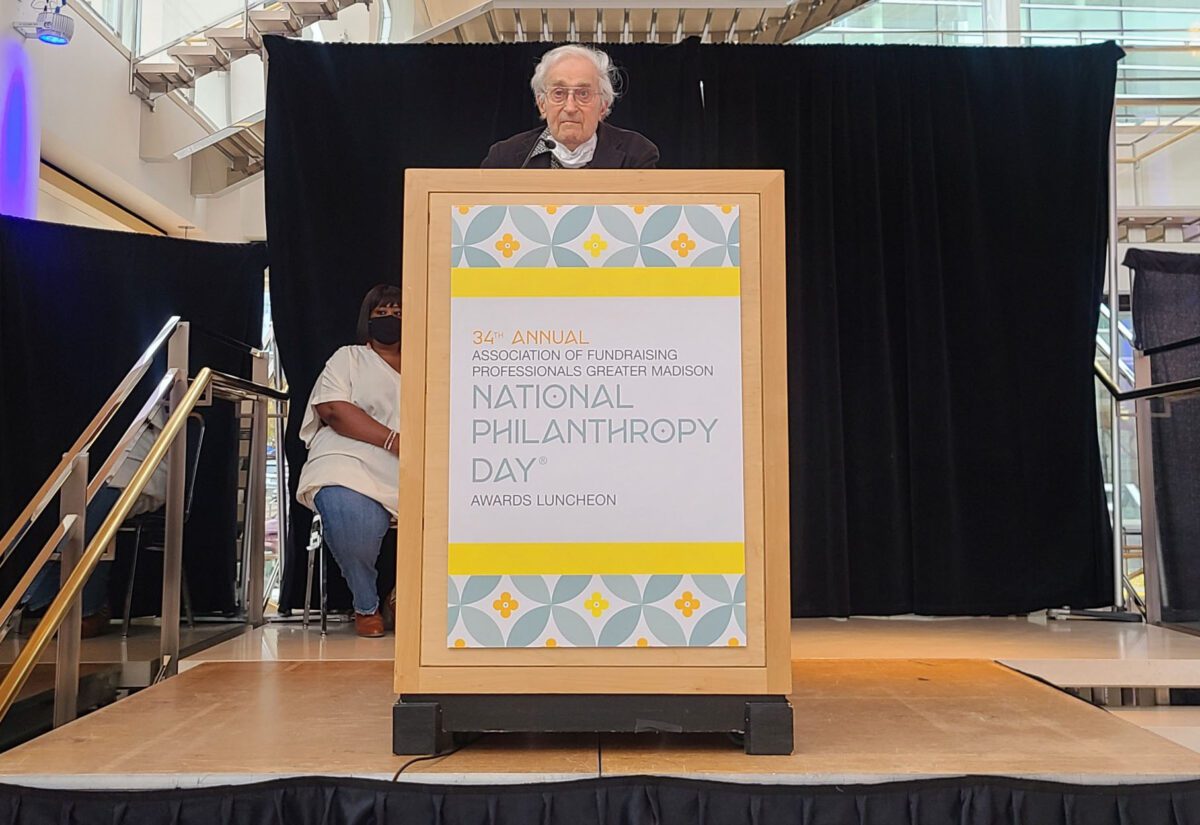 At a November 11 ceremony, Robert “Bob” Auerbach – UW professor emeritus and father of UW Odyssey Project Co-Director Emily Auerbach – accepted a 2021 Outstanding Individual Philanthropist award from the Association of Fundraising Professionals-Greater Madison Chapter for his transformative support of Odyssey over the past 20 years and for his lifetime of giving money and time to other charitable organizations.

“From Holocaust survivor to internationally acclaimed scientist to Dane County philanthropist, my father inspires all with his dedication to humanity and social justice,” Emily Auerbach says, adding that he accepted the award on behalf of his late wife, Wanda, and all the Odyssey students he has met over the past decade.

Along with Wanda, who grew up in poverty in Appalachia, Auerbach adopted a spirit of philanthropy committed to giving back to others with love, respect and dedication. At the beginning of their marriage, while still poor, Bob and Wanda decided to “tithe” by donating at least 10 percent of their income each year to nonprofit organizations.

He has supported many charities in Dane County and beyond over his long life, but dearest to his heart are donations and planned gifts to Berea College, where he received a tuition-free education and met his wife, and the Odyssey Project.

He helped propel Odyssey to new heights, encouraged other donors to dream big and empowered low-income families in Dane County to break a cycle of generational poverty, find their voices and achieve their goals. For his 90th birthday, Auerbach offered $100,000 as a match for donations made to Odyssey. More than 400 donations came in, raising $150,000. He then matched the additional amount over the next few years.

Auerbach is also a musician and donates money he earns from playing piano to Odyssey. He plays in over 20 Dane County assisted living, memory care and senior center facilities. In just one typical, non-pandemic year, Bob played 216 piano gigs at more than 20 venues.

“Black, Latinx, Hmong, Native American and Asian American Odyssey students sometimes refer to him as their ‘Odyssey dad,’” Emily adds, “and greet him with bear hugs and tearful thanks as well as requests for songs they want him to play on the piano.”

Auerbach, 92, endured near-death in Nazi Germany, traumatic separation from his family, and poverty in New York City as an immigrant. He used his tuition-free education from Berea to go on to receive advanced degrees at Columbia University. As a UW professor, Auerbach’s research on immunology benefited cancer research.

Auerbach’s award, as well as others, were given out at a ceremony at the Overture Center for National Philanthropy Day, a day set aside to recognize the great contributions of philanthropy—and those people active in the philanthropic community.

“My father stands as a shining example of philanthropy inside and out, through donations and actions, through a jubilant call to others to help him make the world a better place,” Emily Auerbach says. “His charitable giving over his lifetime has surpassed a million dollars and inspired hundreds of other people to donate also. The impact of his gifts of money, time and love has been profound, helping to ensure the future of Odyssey.”

The Odyssey Project takes a whole family approach to breaking the cycle of generational poverty through access to education. Odyssey offers a six-credit English course for low-income adults; the Odyssey Junior program for children and grandchildren of Odyssey students; Onward Odyssey, offering support as Odyssey students continue their educations; and Odyssey Beyond Bars, teaching credit-bearing and noncredit UW–Madison courses to students incarcerated in Wisconsin prisons.