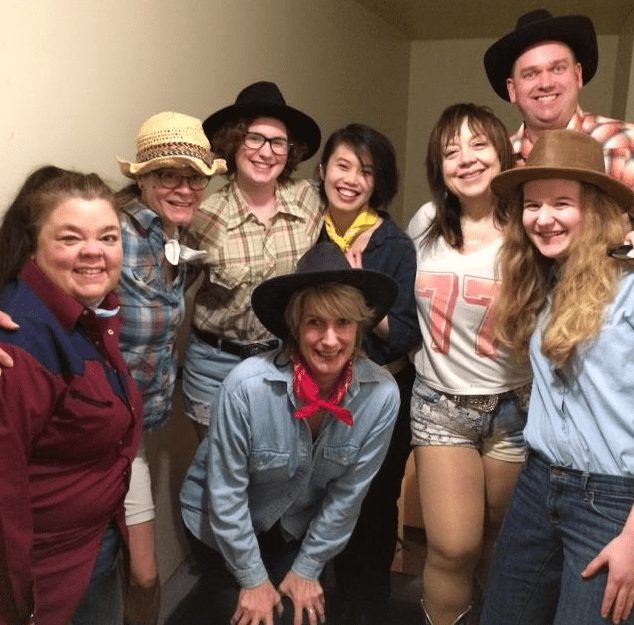 Last month, four dance students found themselves performing on a real stage, for a paying audience. They had the courage to sign on for a spot in Wrong for the Part, a revue by Kathie Rasmussen Women’s Theatre. Their task: dance up a storm in a number from The Best Little Whorehouse in Texas.

The students were part of Dance for Musical Theatre, a class offered by the University of Wisconsin-Madison Division of Continuing Studies. It’s geared toward adults who want to learn more about the dancing part of musical theater, whether for auditions or for fun.

Instructor Cynthia Severt is a director and choreographer who once made her living in musical theater. She started the class this winter (and will offer it again next fall) because she saw no other venues for Madison-area adults who wanted to learn this kind of dance.

The performance opportunity in Wrong for the Part wasn’t officially part of Dance for Musical Theatre, but Severt offered it to students as a way to put what they’d learned into practice. How would they fare in public with their denim short-shorts and silver cowboy boots?

“Theater people would want to take the class because it breaks down and demystifies the steps and terminology commonly used by choreographers in musical theater,” Severt says. “So often at an audition, those without dance training are required to participate in the dance part. Dance for Musical Theatre is designed to give people a leg up in this situation.”

As for non-theater people—those who simply love musicals—they have a chance to learn more about the dance component of a show. Severt shows how dances are put together and how choreography can shape a character.

Students in the inaugural class were a diverse bunch, ranging from theater veterans to those who had never danced. Some wanted to train for auditions, while others just wanted a workout.

Julie Ann Sipos has a background in musical theater but felt like a beginner when it came to memorizing choreography.

“Cindy said one of the things they’re looking for in New York when you go to audition for a show is how well you do with the pressure of learning the number, and how well you sell your way through it when you can’t,” says Sipos, who works as an executive producer at American Girl. “She wanted us to have that experience, so she would teach us a brand new number every week.”

A great sense of accomplishment

In Wrong for the Part, performers played favorite parts they’d never be cast in—for example, females doing Hamlet and males doing Mama Rose from Gypsy. The four students from Dance for Musical Theatre dove into rehearsals for “The Aggie Stomp,” playing members of a Texas football team. They participated in tech week and two performances at Madison’s Bartell Theater.

Sipos was among the performers, and she appreciated the chance to challenge herself.

“I’m not sure any of us had the confidence to perform in public when we started, at least not as Broadway-level show dancers,” she says. “Somewhere along the way Cindy gave it to us, or maybe we gave it to each other, simply by showing up. It was pretty extraordinary, in part because it was so unexpected. I think the audience felt that, too.”

Severt was pleased that her students could experience the magic of coming together as an ensemble.

“The beauty of musical theater is getting in front of an audience and realizing we’re all in this together,” she says. “The students all rose to the occasion and had a great sense of accomplishment.”

‘The dancer is in the house’

Sipos had a revelatory experience during a tech rehearsal for Wrong for the Part, suggesting how far she’d come with Severt’s help.

“I was the last of our group to arrive backstage, and a stage manager said into a headset, ‘The dancer is in the house, repeat, the dancer is in the house.’ I looked around, wondering who that might be, as I had never been called a dancer before. I realized I earned that, just by showing up all winter in this big, sunny studio.”