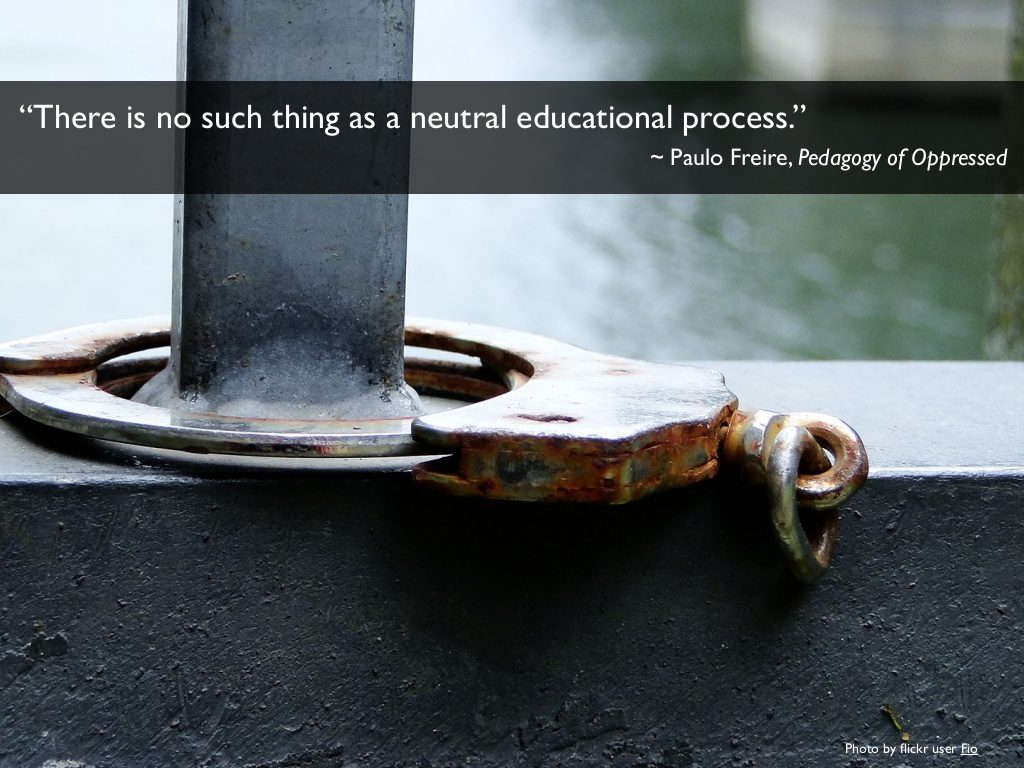 This article was originally published on the Hybrid Pedagogy site on November 18, 2014.

“There is no such thing as a neutral educational process.”  ~ Paulo Freire, Pedagogy of the Oppressed

“Pedagogy is not ideologically neutral.” This line has been for me almost a mantra over the last several years. I’ve said variations of it on Twitter focused on Critical Digital Pedagogy. I’ve circled around this phrase, because I feel increasingly certain that the word “pedagogy” has been misread — that the project of education has been misdirected — that educators and students alike have found themselves more and more flummoxed by a system that values assessment over engagement, learning management over discovery, content over community, outcomes over epiphanies. Education (and, to an even greater extent, edtech) has misrepresented itself as objective, quantifiable, apolitical.

Higher education teaching is particularly uncritical and under-theorized. Most college educators (at both traditional and non-traditional institutions) do little direct pedagogical work to prepare themselves as teachers. A commitment to teaching often goes unrewarded, and pedagogical writing (in most fields) is not counted as “research.”

The entire enterprise of education is too often engaged in teaching that is not pedagogical. There are a whole host of other words I’d use to describe this work: instruction, classroom management, training, outcomes-driven, standards-based, content delivery. Pedagogy, on the other hand, starts with learning as its center, not students or teachers, and the work of pedagogues is necessarily political, subjective, and humane.

What is Critical Pedagogy?

Critical Pedagogy is an approach to teaching and learning predicated on fostering agency and empowering learners (implicitly and explicitly critiquing oppressive power structures). The word “critical” in Critical Pedagogy functions in several registers:

Each of these registers distinguishes Critical Pedagogy from pedagogy; however, the current educational climate has made the terms, for me, increasingly coterminous (i.e. an ethical pedagogy must be a critical one). Pedagogy is praxis, insistently perched at the intersection between the philosophy and the practice of teaching. When teachers talk about teaching, we are not necessarily doing pedagogical work, and not every teaching method constitutes a pedagogy. Rather, pedagogy necessarily involves recursive, second-order, meta-level work. Teachers teach; pedagogues teach while also actively investigating teaching and learning. Critical Pedagogy suggests a specific kind of anti-capitalist, liberatory praxis. This is deeply personal and political work, through which pedagogues cannot and do not remain objective. Rather, pedagogy, and particularly Critical Pedagogy, is work to which we must bring our full selves, and work to which every learner must come with full agency.

In Pedagogy of the Oppressed, Paulo Freire argues against the banking model, in which education “becomes an act of depositing, in which the students are the depositories and the teacher is the depositor.” This model emphasizes a one-sided transactional relationship, in which teachers are seen as content experts and students are positioned as sub-human receptacles. The use here of “sub-human” is intentional and not exaggeration; for in the tenets set out in Freire’s work (and the work of other Critical Pedagogues, including bell hooks and Henry Giroux), the banking model of education is part and parcel with efforts most clearly summed up in the term dehumanization. The banking model of education is efficient in that it maintains order and is bureaucratically neat and tidy. But efficiency, when it comes to teaching and learning, is not worth valorizing. Schools are not factories, nor are learning or learners products of the mill.

I immediately become deeply skeptical when I hear the word “content” in a discussion about education, particularly when it is accompanied by the word “packaged.” It is not that education is without content altogether, but that its content is co-constructed as part of and not in advance of the learning.

Critical Pedagogy is concerned less with knowing and more with a voracious not-knowing. It is an on-going and recursive process of discovery. For Freire, “Knowledge emerges only through invention and re-invention, through the restless, impatient, continuing, hopeful inquiry human beings pursue in the world, with the world, and with each other.” Here, the language echoes the sort of learning Freire describes. With a flurry of adjectives and clauses separated by commas, his sentence circles around its subject, wandering, pushing restlessly at the edges of how words make meaning — not directly through literal translation into concepts, but in the way words rub curiously against one another, making meaning through a kind of friction. Knowledge emerges in the interplay between multiple people in conversation — brushing against one another in a mutual and charged exchange or dialogue. Freire writes, “Authentic education is not carried on by ‘A’ for ‘B’ or by ‘A’ about ‘B,’ but rather by ‘A’ with ‘B’.” It is through this impatient dialogue, and the implicit collaboration within it, that Critical Pedagogy finds its impetus toward change.

In place of the banking model, Freire advocates for “problem-posing education,” in which a classroom or learning environment becomes a space for asking questions — a space of cognition not information. Vertical (or hierarchical) relationships give way to more playful ones, in which students and teachers co-author together the parameters for their individual and collective learning. Problem-posing education offers a space of mutual creation not consumption. In Teaching to Transgress, bell hooks writes, “As a classroom community, our capacity to generate excitement is deeply affected by our interest in one another, in hearing one another’s voices, in recognizing one another’s presence.” This is a lively and intimate space of creativity and inquiry — a space of listening as much as speaking.

What is Critical Digital Pedagogy?

My work has wondered at the extent to which Critical Pedagogy translates into digital space. Can the necessary reflective dialogue flourish within web-based tools, within social media platforms, within learning management systems, within MOOCs? What is digital agency? To what extent can social media function as a space of democratic participation? How can we build platforms that support learning across age, race, culture, gender, ability, geography? What are the specific affordances and limitations of technology toward these ends? If, indeed, all learning is necessarily hybrid, as I’ve argued, to what extent are Critical Pedagogy and digital pedagogy becoming also coterminous?

The wondering at these questions is, in fact, not particularly new. In his forward to Freire’s Pedagogy of the Oppressed, Richard Shaull writes, “Our advanced technological society is rapidly making objects of most of us and subtly programming us into conformity to the logic of its system […] The paradox is that the same technology that does this to us also creates a new sensitivity to what is happening.” And, John Dewey writes in Schools of To-Morrow, published decades earlier, “Unless the mass of workers are to be blind cogs and pinions in the apparatus they employ, they must have some understanding of the physical and social facts behind and ahead of the material and appliances with which they are dealing.” If we are to keep every educative endeavor from becoming mill-work — from becoming only a reflection of oppressive labor practices and uneven power relationships — we must engage deeply with its reality.

Increasingly, the web is a space of politics, a social space, a professional space, a space of community. And, for better or worse, more and more of our learning is happening there. For many of us, it is becoming increasingly difficult to distinguish between our real selves and our virtual selves, and in fact, these distinctions are being altogether unsettled. In “The New Learning is Ancient”, Kathi Inman Berens writes, “It doesn’t matter to me if my classroom is a little rectangle in a building or a little rectangle above my keyboard. Doors are rectangles; rectangles are portals. We walk through.” When we learn online, our feet are usually still quite literally on ground. When we interact with a group of students via streaming video, the interaction is nevertheless face-to-face. The web is asking us to reimagine how we think about space, how and where we engage, and upon which platforms the bulk of our learning happens.

In Small Pieces Loosely Joined: a Unified Theory of the Web, David Weinberger writes, “We are the true ‘small pieces’ of the Web, and we are loosely joining ourselves in ways that we’re still inventing.” Ten years ago, following the publication of Weinberger’s book, I wouldn’t have imagined the learning networks I have now built with colleagues working together (sometimes simultaneously in real time) in places as seemingly remote as Portland, Madison, Manchester, Prince Edward Island, Sydney, Cairo, and Hong Kong.

This is not to say, however, that there aren’t challenges to this sort of work. In On Critical Pedagogy, Henry Giroux argues,

Intellectuals have a responsibility to analyze how language, information, and meaning work to organize, legitimate, and circulate values, structure reality, and offer up particular notions of agency and identity. For public intellectuals, the latter challenge demands a new kind of literacy and critical understanding with respect to the emergence of the new media and electronic technologies, and the new and powerful role they play as instruments of public pedagogy.

Most digital technology, like social media or collaborative writing platforms or MOOCs, does not have its values coded into it in advance. These are tools merely, good only insofar as they are used. And platforms that do dictate too strongly how we might use them, or ones that remove our agency by too covertly reducing us and our work to commodified data, should be rooted out by a Critical Digital Pedagogy. Far too much work in educational technology starts with tools, when what we need to start with is humans.

We are better users of technology when we are thinking critically about the nature and effects of that technology. What we must do is work to encourage students and ourselves to think critically about new tools (and, more importantly, the tools we already use). And when we’re looking for solutions, what we most need to change is our thinking and not our tools.

A Critical Digital Pedagogy demands that open and networked educational environments must not be merely repositories of content. They must be platforms for engaging students and teachers as full agents of their own learning.

Critical Pedagogy, no matter how we define it, has a central place in the discussion of how learning is changing in the 21st century because Critical Pedagogy is primarily concerned with an equitable distribution of power. If students live in a culture that digitizes and educates them through a screen, they require an education that empowers them in that sphere, teaches them that language, and offers new opportunities of human connectivity.

Critical Pedagogy is as much a political approach as it is an educative one. As Sean Michael Morris writes, it is “a social justice movement first, and an educational movement second.”

So, Critical Digital Pedagogy must also be a method of resistance and humanization. It is not simply work done in the mind, on paper, or on screen. It is work that must be done on the ground. It is not ashamed of its rallying cry or its soapbox. Critical Digital Pedagogy eats aphorisms — like this one right here — for breakfast. But it is not afraid to incite, to post its manifestos, to light its torches.

If Freire Made a MOOC: Open Education and Critical Digital Pedagogy from Jesse Stommel