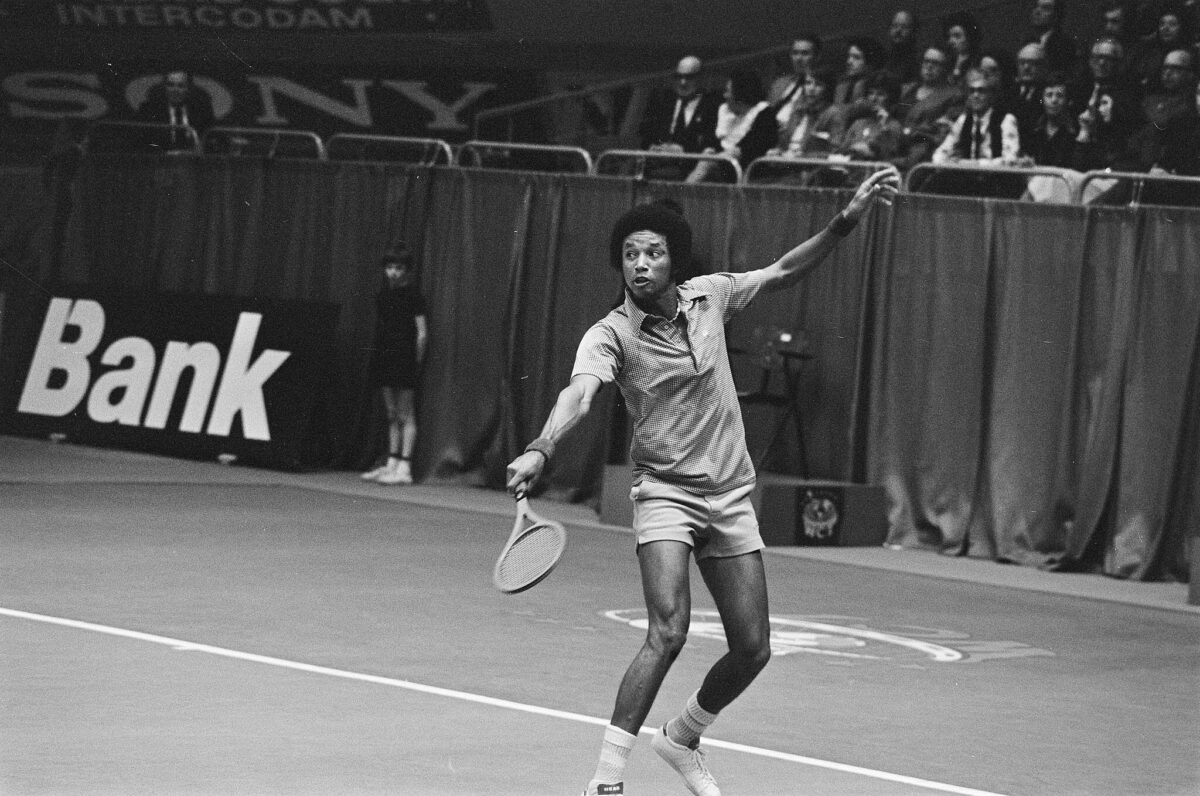 In the preface to his biography on Arthur Ashe, Raymond Arsenault writes, “Of all the historical characters I have studied during my long scholarly career, [Ashe] comes the closest to being an exemplary role model.” I agree.

Ashe has been an inspiration to me throughout my life. As a boy, I looked up to him for his athletic prowess and sportsmanship. But I observed Ashe long after his tennis-playing pinnacle as he grew to excel as a writer, commentator, activist, and advocate before his untimely passing in 1993 at age 49.

Fighting injustice on and off the court

As many people know, Ashe was the first African American tennis player selected to the United States Davis Cup team and the only African American male to win singles titles at Wimbledon, the U.S. Open, and the Australian Open. To be a black athlete in tennis in the 1960s and ’70s meant harassment on the court and restricted access to facilities. It’s not that such racism didn’t hurt Ashe tremendously. It did. He once wrote, “Racism is for me a more onerous burden than AIDS.”

But he persisted. In the words of his friend Charlie Pasarell, “He used dignity and restraint as weapons against his opponents.” Perhaps because sport was often bound with social injustice, Ashe did not separate the two. “While he loved the game of tennis and sports in general, he could not accept or endorse the intellectual and political impotence that characterized most of the sporting world’s top figures,” Arsenault explains.

Ashe’s three Grand Slam victories proved him a persistent fighter within the racially unjust world of tennis, but off the court he fought for civil rights and funding for AIDS research. He also cofounded the National Junior Tennis League, an organization that emphasizes education and character development more than it emphasizes athletic excellence. Ashe lamented institutions that failed to prepare students for life apart from sports.

When Ashe was diagnosed with AIDS in the early 1980s, a period rife with social stigmas and fear surrounding the illness, he remained faithful to his values and continued, incredibly, to give of himself. “You have to stop thinking of yourself as a victim,” he told a reporter, “and become a messenger.” He used his platform to fight to get people to see AIDS as “our problem.” The Chicago Tribune wrote of his death, “He was a soft-spoken gentleman with the loudest of convictions. A graceful and eloquent champion as well as a brash and stubborn activist. . . . Ashe will be remembered as all of those things.”

It’s Ashe’s selflessness that makes him so compelling. “From what we get, we can make a living,” he once wrote. “What we give, however, makes a life.” And he famously opined, “You’ve got to realize that the Lord blessed you with two ears and only one mouth, so He wants you to listen twice as much as you talk.”

But I tend to look at Ashe’s life as a story of integration.

Most apparently, Ashe demonstrated integration by being a black athlete in a historically white sport, and by promoting racial justice and access to education. But the notion of integration is both bigger and smaller than that in Ashe’s case. Bigger because he strove for a larger integration than a racial one. He claimed he was a “citizen of the world,” and he used such language when urging global policy changes on our approach to AIDS, for example. And smaller because he integrated various parts of himself: the athlete and intellectual, the competitor and the peacemaker, the listener and the speaker.

In other words, integration worked on personal, professional, and social levels for Ashe. And he improved nearly every person and institution fortunate enough to be part of his journey.

The lessons we can glean from Ashe’s life are too many to enumerate here. He’s a role model because he led by personal example; because he gave of himself ceaselessly to causes that benefit others; because he engaged with those in his profession, community, and society, both domestically and globally; because despite being a competitor, he valued open-mindedness, inquisitiveness, and helping those in need.

He is in many ways the embodiment of the very mission of Continuing Studies, which “advocates for and engages lifelong learners” to realize a vision of connecting lifelong learners with “knowledge and skills that enable them to be enriched and productive members of their communities.”

Over the course of my career, I’ve returned again and again to words often attributed to Ashe: “Start where you are, use what you have, and do what you can.” Life can be a humbling journey, one that often exposes that I have so much more to learn. But the pursuit is to leave the world a better place—like Ashe—starting where I am, using what I have, and doing what I can.