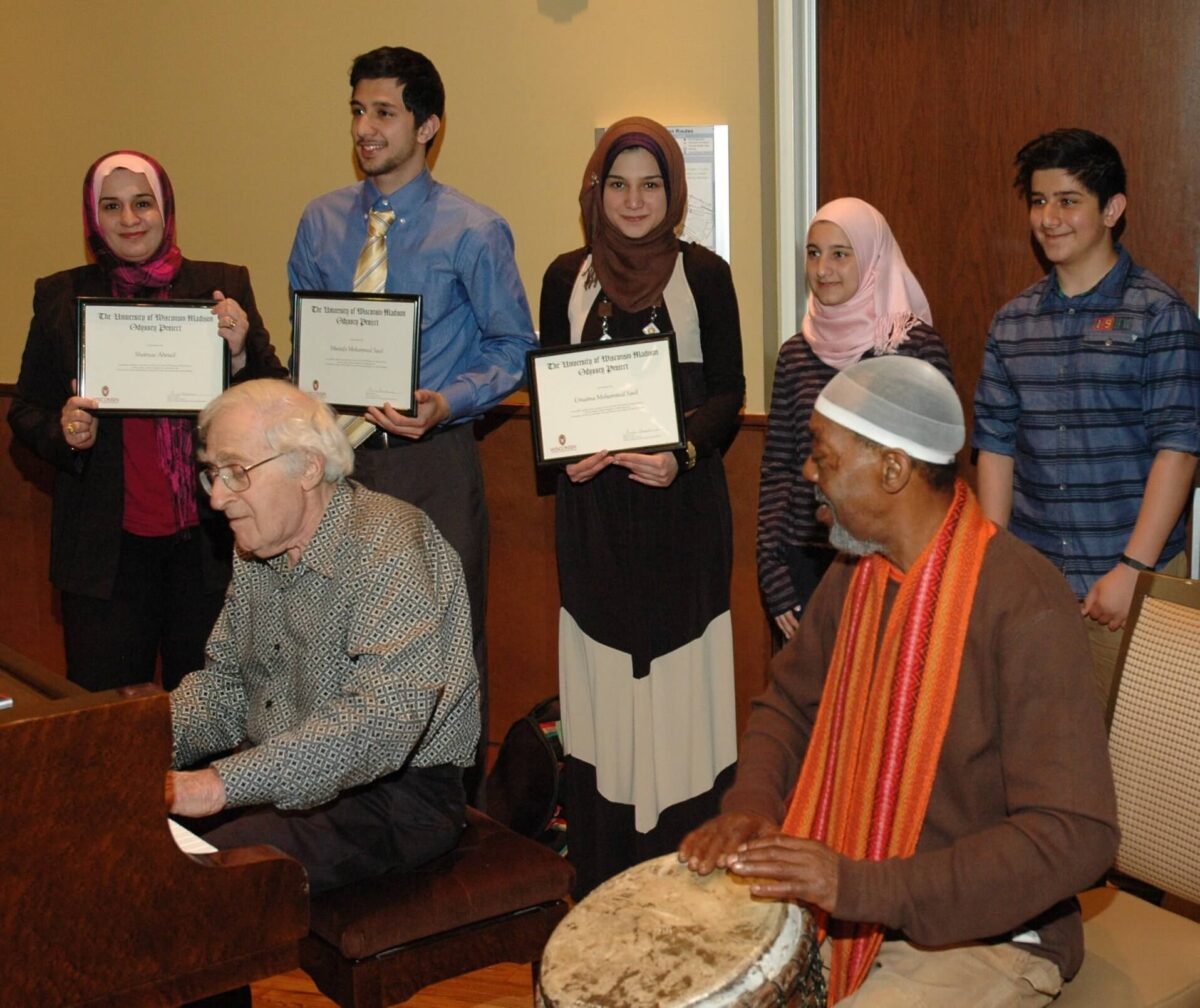 At age 10, Bob Auerbach opened the front door of his Berlin home to uniformed, armed Gestapo while his father fled out the back door. As Jews, the family narrowly escaped deportation to concentration camps.

The next two years brought more trauma: Rapid escape from Hitler’s Germany, terrifying separation and internment of family members while in England, the sound of Nazi bombers overhead, and an Atlantic crossing dodging U-boats and icebergs.

I think if that had happened to me, I might be permanently bitter toward humanity. Instead, my father seems to have embraced the 90 years of his life with hope, joy, love, and generosity.

Poet Emma Lazarus called the Statue of Liberty the “Mother of Exiles” and imagined her saying, “Give me your tired, your poor, your huddled masses yearning to breathe free.” Bob remembers the moving sight of the giant, welcoming statue on the horizon as his exiled family arrived in New York City by boat.

Starting over was challenging. My grandparents had been lawyers in Berlin, but their German law degrees were worthless in America. When my grandfather tried to sell scarves, speaking in his thick German accent, housewives slammed doors in his face. He persevered, eventually becoming an accountant, but money remained scarce.

Quakers in New York informed Bob about a progressive Christian school in Kentucky that was free to the poor: Berea College. Although designed primarily for Appalachian youth like my mother, who came from a poor Methodist family in rural Tennessee without running water, Berea admitted 10 percent “others” for diversity.

Bob was one of those others.

At Berea, he met Wanda, the love of his life. They married in the college chapel, went on to graduate school at Columbia, and found fulfilling careers at UW-Madison: Wanda as a medical librarian, and Bob as an internationally recognized scientist whose pioneering work in developmental biology led to his receiving a named professorship from the University of Wisconsin-Madison and a Distinguished Alumnus award from Berea.

Almost 20 years ago, I published a feature in the Wisconsin State Journal about my parents’ golden wedding anniversary. I wrote, “Although they were born over 4,000 miles apart and in vastly different worlds, I have never met a couple more devoted to each other.” Despite profound religious and cultural differences, Bob and Wanda Auerbach were happily married for 62 years, until Wanda’s death in 2012.

What does one do to cope with the unimaginable grief of losing a spouse after more than six decades together?

To those who say, “Oh, time will heal wounds,” Bob replies, “No, it doesn’t get better. I miss her more, not less.” He inspires me by transforming his pain as a widower into joy for others who suffer. Nearly every day, he stars as the volunteer “piano man” at retirement homes, senior centers, hospitals, and assisted living facilities all over the county. I have seen downcast elderly patients in wheelchairs unable to recognize their relatives or formulate a sentence start smiling, tapping their feet, and humming along as Bob plays “Take Me Out to the Ball Game” and “Smoke Gets in Your Eyes.”

Bob also has shared his music with every UW Odyssey Project class since it began in 2003, and he has played piano for every Odyssey party and graduation.

With the help of a phenomenal team, I have been able as Odyssey’s director to bring part of my parents’ Berea experience to South Madison. Odyssey has empowered more than 400 adults to overcome adversity and achieve their dreams through free access to a two-semester humanities course. Graduates have moved from homelessness to master’s degrees, from incarceration to meaningful work in the community. As one student put it, “The Odyssey Project helped me unwrap my gifts and rewrite the story of my life.”

Believing in the power of education to break a cycle of generational poverty, Bob chose at the time of Wanda’s death to use her retirement account to start an endowment to benefit Odyssey students. Now he is marking his 90th birthday with a surprisingly generous offer. Here is what he wrote:

In my 90 years I have passed from a wealthy early childhood, through persecution and emigration to poverty, to a new life in the USA, to a free college education at Berea College…then to an academic career of half a century which has left me with a secure retirement income, time to pursue my longtime avocation in music, and the unsurpassed blessing of a wonderful family. I have decided to offer up to $100,000 as a match for whatever contributions to Odyssey are received as a result of my 90th birthday, with this match strengthening the long-term needs of the Odyssey Project.

As Odyssey has expanded, including Odyssey Junior and Odyssey Beyond Bars, the need for funding has expanded as well. I strongly believe that the program is a model for how to help overcome social, racial, religious, and age-associated barriers.

When friends, relatives, and colleagues ask Bob what they can give him for his 90th birthday on April 12, he invites them to make “absolutely optional” gifts to Odyssey but quips that any other gifts to him are “absolutely forbidden.”

I extend that invitation to all. Please join me in celebrating Bob Auerbach’s legacy of moving from the hatred of the Holocaust to an embrace of diversity, of moving from poverty and loss to philanthropy and love. Happy 90th birthday to my amazing father!

To make a donation to the Odyssey Project that Bob Auerbach will match, go to the donation webpage or call 608-262-3733.

Checks made payable to the UW Foundation with “Odyssey Project, Bob Auerbach” in the memo line can be mailed to UW Foundation, US Bank Lockbox 78236, Milwaukee WI 53278-0236.

The graduation ceremony for the 2018-19 Odyssey Project class is May 8, 6-8 p.m., in the UW Memorial Union Great Hall. The event is open to the public.

This article originally appeared in The Wisconsin State Journal.